The reports of a sharia No-Go zone in Dearborn are fake. Evangelists were heckled, and objects were thrown at them when they crashed an Arab celebration. Based on that distinct provocation, and the reaction, some biased news outlets are claiming that 'Christians were stoned.' To me, that sounds like an organized, quasi-governmental suppression and punishment, not a dust-up between two unfriendly groups during the equivalent of a county fair.

It's even harder for me to know what's the story in Europe, where there have been much higher levels of immigration from Muslim countries. This article refers to many sources, but is still dubious. It features someone (an caucasian convert putting up one 'sharia zone' sticker), and few other pictures of these supposed zones. This list of French zones, supposedly sharia No-Go zones, may just be a list of high-crime or high-need areas. My French is too rusty, but maybe that's the point. A translation would be likely to reveal the knowing misuse of this piece of information. Snopes debunks it.

Why should I worry about one of many faked news stories? I suppose it got my goat that a nationally known and probable GOP presidential candidate would promote such dreck. I'm referring to Bobby Jindal. As this article says: "I'm tired of being semi-alone in viewing the Louisiana governor as especially cynical and dangerous." Yes, that's the way it looks to me too.

I'm a strong believer in diversity and pluralism, but also in not inviting avowed enemies to share your house. The US and European countries, in the name of diversity and charity for refugees, have been lax in screening out those who would bomb us, kill us, and take over our countries. We should have been more careful in vetting refugees and other immigrants, but since we weren't, we have the problem of an unknown number of bombers and terrorists among us.

This leads to a lot of complications that I haven't been able to sort out. How do we keep an eye on potentially violent Muslim terrorists without shredding the rights guaranteed by the Constitution? I hoped I could work out an answer in time for this post, but I can't. This is a tough issue that we face here in the US, but is even tougher in Europe. This is the real question, as opposed to the fake worry about sharia zones and Christians being stoned. 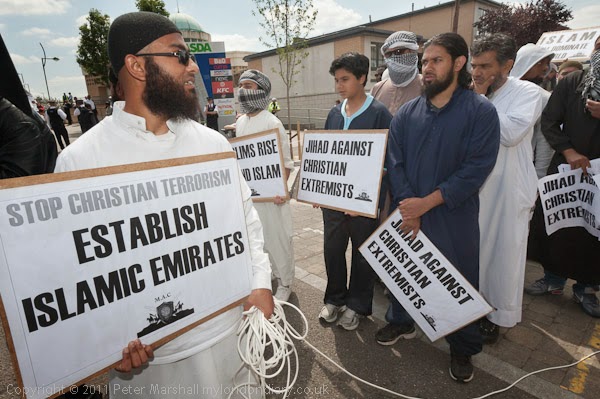 Extras. I also looked for Youtube videos showing these sharia zones. Most of the videos are of talking heads, except this interview with two English women, and an interview with a pro-Sharia spokesman. No good evidence for sharia No-Go zones at Youtube.

Posted by ModeratePoli at 11:02 PM