I almost missed this story because there was no way I would listen to another State of the Union speech. Obama floated the idea of taxing 529 college accounts to help pay for his proposed program for free community college tuition.

The current law says that money placed in 529 account isn't tax deductible when it goes in, in contrast to an IRA, where you get to exclude the contribution from your taxes for that year. However, all the earnings that accumulate are tax-free. So, the principle is that you're taxed either at the beginning or at the end, but not both.

I haven't been able to verify that Obama proposed to tax the earnings in 529 accounts because the proposal is already dead. This is no surprise. The upper middle class doesn't want to lose some of their tax advantages, like deductions for mortgage interest, pre-tax contributions to IRAs and 401k's, or 529 college savings accounts.


Progressives would take your 401k

I know there are a lot of progressives like this because I live in a town with way too many of them. According to them, we can't build or improve soccer fields because we must direct the money to the poor and underserved. We can't preserve a beautiful parcel of land, because that money should go to build affordable housing. Teachers and town workers shouldn't get a raise because, well, they already have paychecks. These progressives have never seen a poverty program they didn't want to fund at a higher level and have never seen anything other than poverty programs that deserve a little more money.

Would these progressives like to tax my 401k? Indubitably.

I'm not so crazy about the idea of giving them free rein to put a siphon in my retirement savings, and I have a lot of company. The people who share my view include a lot of Dem supporters--especially in academia and in liberal states. That explains the pushback and fast reversal on the 529 proposal.


Limiting deductions is not confiscation

So the idea of taxing 529 accounts was quashed. I assume that no powerful Dem will listen to progressives who want to do something similar to Roth IRAs. But how about regular IRAs and 401k's. These programs have a different kind of tax advantage--you get to deduct contributions from your taxable income, saving 15% or 25% or even more, depending on your tax bracket.

It's possible to lower the amount that people can deduct, and that's not the same as double-dipping with the taxation. Limiting deductions is already happening. Deductions of many types phase out for those earning over $100K. There are limits on the amount of 401k contributions that can be deducted on your tax return. Fiddling with limits of deductions isn't the same as double taxation, or confiscation--though some mindless conservative media outlets don't seem to know the difference. 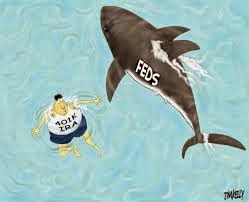 Extras. I noted back in 2011 that some conservatives warned that Dems want to confiscate your 401k savings. It was based on a Big Brother-like proposal to limit the types of retirement savings plans and have them all managed by the government. That sounds scary, but the proposal didn't go anywhere. If you're scared, this article tries to talk you down. Jared Bernstein evaluates the tax breaks from 529s. No surprise who gets most of the benefits.
Posted by ModeratePoli at 5:59 PM