Tearing something down is easier than building it up. That's been an advantage to the GOP for the last six years. They could be united in opposition to Dem policies, which went ahead regardless. They could be united as they voted to repeal Obamacare. But they couldn't unite on a definite policy--one with numbers and consequences to actual people. Their budgets were a bunch of hand-waving, their replacement for Obamacare was just a pile of toothpicks. They could agree to cut food stamps (that wasteful Dem program), but not how to handle the farm subsidies that are the flip side of food stamps (both being the purview of the Agriculture Department).

Now Republicans will have to write some bills. They can no longer use the Senate Dems as the crutch that finally puts together bills with some hope of passing.  So far, however, the Republicans haven't been able to write or pass most major bills. The conservatives attempted to write an anti-abortion bill, and then found that they didn't have enough votes. Well, the country didn't exactly need new abortion restrictions, and we all went on with our lives.

The next hurdle will be funding for the Department of Homeland Security (DHS). The last Congress funded them for two months because certain Republicans wanted the opportunity to force Obama to change immigration policies. But it turns out that it's easier to criticize the president than actually make him do something. It's very difficult to find the right carrot or stick to force the president to act the way you want him to act. (I've got that odd deja vu sensation--this came up in a different context recently. Oh yes, How do you make frat boys behave?)

Ahem, back to the point. GOPers want to make Obama reverse his immigration policies, but they don't seem to have a big enough stick. A few are aching to use the 'power of the purse' and cut off funding, but that was a failure last time because Obama just waited them out. Do they have another strategy? Maybe, but anything else is likely to fail too.

Unfortunately, the Republicans are also disunited in realizing their impotence. They may well thrash themselves skinless during brawls over what to do. There are some Republicans (with larger Latino constituencies) begging the rest to cool the anti-immigrant focus. Will they really be heeded with the right wing always ready to launch invective against these supposed RINOs and traitors? I really don't know. The right wing may let this fight go, but I can't see them doing it every time. The right wing is going to show that they're different from the RINOs--it's just a matter of time. 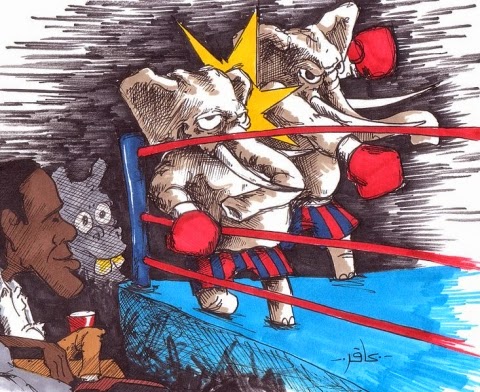 I'd like to invite you to join us as an author in Alexandria, either as an occasional guest author or as a fully privileged Resident Author.

Alexandria might also be the perfect place in which to write about issues and interests which may not yet be an ideal fit for your current blog.

If you think you might be interested in becoming a Resident Author, let me know and I'll forward our formal invitations for you to look over and return, if you decide to proceed.

I look forward to hearing from you.