The Tea Party narrative is that it sprang spontaneously in early 2009 when a number of conservatives saw what was happening in the new Obama administration and had to act to "Take Back Our Country." So far, I've found out that, unless you believe the Tea Party sprang fully formed in February 2009 (which I disbelieve based on knowledge of physical systems), the roots of the Tea Party lay before Obama was inaugurated and before the election of 2008.


Bush Crumble
The real roots of the Tea Party start after the Democrats gained control of the House and Senate in 2007. With Democrats in control of some of the government, the talk radio conservatives had targets with real power, not just straw men. The Republican nomination race started heating up by April 2007, with Fred Thompson as the conservative favorite. (Note: Most of my information comes from HotAir because the comments are readable, there is more discussion of differing ideas, and the archives are easy to navigate. Since it has links to Michelle Malkin, Allahpundit, pajamasmedia, and similar conservative sites, I took it as representative. Not being a conservative insider, that's the best I can do.)

By fall of 2007, the discontent with the economy, the looming mortgage crisis, torture scandals, and Bush cluelessness and over-promising had grown to the point that is clear that the country wouldn't vote for a Bush clone in 2008.

Pick the Un-Bush
McCain, the maverick who sponsored unRepublican legislation like public campaign financing, cap-and-trade, immigration reform, etc., seemed the most favored of the Republican candidates, at least by the general electorate. After more conventional conservatives--Thompson and Guilani--fizzled in early 2008, it became a two-man race between McCain and Huckabee. McCain won fairly easily.

However, most of the party supported him reluctantly. They hated his previous stance on amnesty for illegals immigrants. In fact, the most common epithet for him was McShamnesty. Huckabee was disliked even more for supporting more generous social programs and being too much a Christian and not enough a conservative. He was also blamed for blocking the only other credible challenger, Romney. This was a surprise to me, but here's a typical comment:


"Ok. Today I sign up on Mitt’s site and donate. If it is McCain v. Hillary in November I pull the GOP lever except for POTUS. That I leave untouched. 4 years of Marxism, then back to conservatism." - HotAir comment 1/29/08

It's important to remember that Romney was seen as a Mr. Fixit with fairly solid conservative credentials in 2008. The requirement for purity didn't exist then. In fact, Romney was a good contrast with the dumb, dependent-on-advisers Bush. He wasn't as popular with movement conservatives as Fred Thompson, but he was more on the ball with policy details. Also, this is before Obamacare became evil incarnate and damned Romney's Massachusetts healthcare program with it.

So in early 2008, McCain was on his way to the Republican nomination, but he was hated almost as much as this woman (image from the HotAir website): 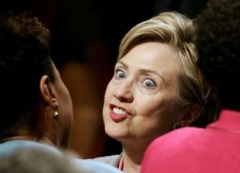 Changing the One (We Hate)
By the February, McCain had sewed up the nomination, but the Democratic race was still going strong. Hillary was slipping from the most-hated throne as Obama ascended to it. By April, Obama was the one to hate, disrespect, and belittle:


'He wants people to believe that he can change the game, but in the three short years he has served in national office, he has done nothing to suggest that. John McCain actually has a track record of working across party divisions and trying to reach solutions on controversial issues; Barack Obama prefers to reserve his “political capital”.' - Ed Morrissey, 4/24/08

"It is all about being labeled in History books: 'Barack Hussein Obama, the First African-American President of the United States of America' THAT IS ALL. Why people can’t get it? Idiocy is rampant in America." - HotAir comment 4/24/08

Self-Awareness
There were flickers of self-awareness during the nomination process. Karl Rove was blasted for giving bad advice to Bush, but he could "only do so much for a guy like GW Bush." The first strong self-criticism came in May:


"Memo to the GOP: we don’t believe your rhetoric any longer. Oh, conservatives still want an end to corruption, a reduction in the size and scope of the federal government, and spending discipline to go with lower taxes. We just don’t believe that many elected Republicans want those goals, nor do we think that current Republican leadership has any real commitment to them, either." - Ed Morrissey, 5/22/08

Even McCain's meeting with the Log Cabin Republicans and Obama's tax plan got some fair discussions.

First Tea in the Harbor
Everything changed with the Wall Street bailout. This is also the first fight in the Tea Party struggle, before it was called the Tea Party. More bloggers and their commenters rallied around McCain, and the vitriol flew at Obama, Reid, and Pelosi.


"McCain’s got little choice other than to support the bill. But chalk me up as one who thinks he should demand a “clean” bill. That way, he can demonstrate that he’s casting a vote to protect the American people, not bloat the government even more with pork." - HotAir comment 9/23/08

"I wish someone would run an ad calling out Obama for what he is, a Marxist…The left has pounded home the “fact” that Bush was an idiot for eight years, and the average jughead on the street, it’s all he knows. “Vote against Bush”. The message needs to be changed to “Vote against Marxism”." - HotAir comment 9/30/08

"True conservatives should be against this 'crap sandwich'." - HotAir comment 9/30/08

After the first version of the bailout was defeated in the House, it passed on the second vote on Oct. 1. Votes for the bailout have since been an issue for Republicans facing Tea Party-backed primary challengers. Although at the time conservative opinion was quite split, afterward it was a stain on the record of Republicans if they didn't stand against the big-government bailout. This position ignores the financial crisis the country was suffering, but such nuance doesn't register with the Tea Party.

The campaign just got nastier after that bailout passed with both candidates supporting it. Obama was called a socialist, marxist, black liberationist, empty suit, elitist, the ONE, and media-anointed messiah.


Regroup and Reload
With the economy in crisis, the expectations of late 2007 came true, and the Democrats sailed to  victory, winning the presidency, more seats in the house, and what looked like a filibuster-proof majority in the Senate. The one bright spot for movement conservatives was Sarah Palin. She was almost uniformly adored by the conservative blogosphere. They loved that she was the attack dog against the evil socialists in general and Obama in particular. After the election, McCain went back to being panned as a fraudulent conservative.

The day after the election, the movement conservatives actually rallied. There was a gracious concession to the election victors, but only in the polite right-leaning press. In talk radio and the conservative blogosphere, Obama was slammed as viciously as before.

Jeff Flake, an Arizona congressman, summed up the loss this way in the polite press:


Let's face it: We Republicans are now, by any reasonable measurement, deep in the political wilderness... Today the party is defined in the public mind by the Bush presidency... I suggest that we return to first principles. At the top of that list has to be a recommitment to limited government.

Most House Republicans opposed the recent bailout and will be in a strong position to promote economic freedom over central planning ....As surely as the sun rises in the east, the Democrats will overreach. As long as we Republicans... get back to first principles and work like there's no tomorrow, we've got 'em just where we want 'em.

In the impolite talk radio and blogosphere


Limbaugh: "But do you know what the Democrat plan for your 401(k) is?... So far, this is not Obama yet ...the odds are that it will sound attractive to [Obama] because these people are all about expanding government coffers."

Jason Lewis: "We are the 'leave us alone' crowd, so naturally we don't gravitate towards government. Unfortunately, you've got this well-funded, merry band of committed socialists who look at government for power. We need people committed to defending free-market capitalism."

MacRanger: "This is a call to fellow conservative bloggers to join together in a coalition with one goal, to return the White House and the Congress to true conservative Republican control.
Let’s get to work!" MacRanger also published his first birther post only after the election, on Nov. 9.

HotAir comment: "Perhaps he doesn’t realize that too much change could bring revolution also.
Ya feel lucky, punk? Well, do ya?"

HotAir comment: "If I hear one more person say 'wait ’til he’s been in office a while before you judge him,' I’m gonna smack that individual right in the mouth. If by now, you cannot discern HOW Obama will govern from his past actions,and statements, then ya gotta have the sentience of a fence post.

HotAir comment:  "We can sit here all day and comment on this blog, but we’re preaching to the choir here! The elites in DC and NYC don’t even know we’re here! The left thinks the right voted AGAINST The Big O because of race! They don’t EVEN know how we feel, what we stand for, or the fact we’re highly intelligent people... We’re going to have to get off our butts and away from our computers and take it to the streets. We need a ring-leader obviously! Some one give us a date or series of dates, locations, and tell us what we’re marching for on that particular day (we have so many things to protest), and we’ll do it!

The last comment sounds like the Tea Party, doesn't it? The ideas of no cooperation, stone wall opposition in Congress, and constant vocal hammering were already in the talk radio and blog media well before Obama was even inaugurated. The transition to street protest just got the ideas out in the open where non-conservatives could see it. That was easy to do. Some local conservatives, already networked and already steeped in the language, needed only to organize conservatives from their local areas. The ideas, the talking points, many of the tactics, and the enthusiastic troops were already poised in 2008. They just needed a name and a date. And they got those on Feb. 19, 2009.

The Tea Party may have the narrative that the small-government conservatives slumbered during the big, bad Bush administration, but awoke just in time to hem in the socialist threat from Obama. That's a convenient story if they want to paint themselves as heroes, when actually they were deaf, dumb, or collaborators while Bush pissed away 8 years and trillions of dollars that we can't get back now.

Posted by ModeratePoli at 2:36 PM