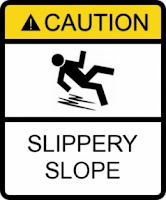 We've all heard about logical fallacies and rhetorical tricks. The straw man argument, ad hominem attacks, exaggeration, etc. I'd like to catalog more of these arguing tactics. Reader suggestions and verbatim examples are strongly encouraged:
Examples:


Look at Europe and Cuba and every other place that has government run health care, they are in big financial trouble. - Correlation is causation.


13.  It's common sense - Common sense always supports your side. This is similar to asserting something without evidence and declaring "case closed."

14. The well-known "No true Scotsman" argument. This is used to discredit someone so you don't have to listen to their point. All Americans should rally around the president. But here's an American who isn't rallying around. Must not be a true American.

15. Gotcha question - A question meant to derail a discussion rather than clarify positions or weak points. A gotcha question isn't on an important point in the argument, but on trivia. It functions similarly to the demand for proof (#7), and is similarly obnoxious in having a know-it-all smell to it. Example: "Pop quiz time: When MLK was in jail, ... which 1960 presidential candidate called Coretta Scott King to express sympathy and support: JFK, or RMN? Take all the time you need before responding...."

Links to the 13 or 20 top fallacies. Link to a good list of 42 fallacies with excellent examples and very little Latin.

Update 8/21/19. Quite a comprehensive list, but it doesn't list Gish Gallop, which is a great name, though I thought it was called fish gallop, which is even better.
Posted by ModeratePoli at 9:36 PM

Begging the question, which is almost always used incorrectly: http://en.wikipedia.org/wiki/Begging_the_question

Don't even get me going on the misguided plural usage of "data"... ;)

I intentionally didn't look at the standard list, but created my own list based on my extensive reading of blogs comments.

It was a fun exercise, actually. The standard lists aren't fun: they remind me of the most dreadful parts of philosophy class and Latin class all rolled into one. [shudder]

Part of a comment at Atlantic demonstrating the "No True Scotsman" fallacy:

"Free Americans who actually research their candidates instead of having them described to us by said enemy-collaborating shills KNOW that Ron Paul didn't write those letters..."

And I thought I knew what "free" means.

An example of "correlation is causation" (#3). Joe the plumber says gun control caused the holocaust. I am not making this up.