You may see this proposal in the platform of Republicans. They advocate a tax holiday for companies bringing home the profits collected in other countries, called repatriation. I'm much less a business expert than some who read this blog, so I may be about to subject myself to cruel humiliation, but I'll attempt to explain this anyway.

The federal government taxes profits that US companies earn in foreign countries. It gives credit for taxes paid in the original country, but the companies still have to pay tax beyond that up to the top rate of 35%. Since the income tax rate on US companies is so high, companies may park the profits and not take them officially. Companies are asking for a tax holiday to bring the profits back to the US, reinvest them here, and grow the economy.

Sounds like a no-brainer, right? Not quite. This is a great line, but I hope it isn't successful like the "corporate gains and dividends are double taxed" argument. The truth, which the companies won't be mentioning, is that much of the money is already deposited in US banks. Also, the last repatriation holiday resulted in a lot of stock buybacks, not new investment.

So, when I read this talking point sometime next year, I'll be ready with this comeback:


This is a convenient argument for bigwigs who would like to increase their personal wealth. A tax holiday would allow executives to 1) repatriate profits, 2) avoid corporate taxes, 3) initiate stock buy-backs, 4) raise the stock price, 5) sell stock at higher prices, 6) take capital gains at 15% next year (if Obama is re-elected) or possibly 0% in 2013 if there’s a Republican president. But it’s very important for executives to get this repatriation tax holiday soon, because special low capital gains rates may be over at the end of 2012.

Do I think they’re planning to reinvest? No, but they hope other people will believe it. 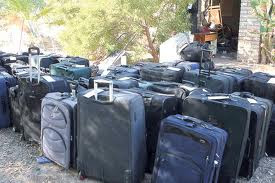 All that money pining to come home

Posted by ModeratePoli at 9:05 PM

...and here's what happened in 2004 when Washington tried the same tactic:

Apparently, Corporate America is a WHOLE lot smarter than Washington!

I enjoyed your thrust and parry on today's posting!

@PJ, thanks for the compliment. In this case, it should have been like swatting a fly, but damn, it took time and several tries. For the mystified, here's the link.