Would you support or join this police force?


"The Masonic Fraternal Organization is the oldest and most respected organization in the 'World.' Grand Masters around the various states are facing serious safety concerns for their Jurisdictions and their family members. The first Police Department was created by the 'Knights Templar's' back in 1100 B.C.

"The Masonic Fraternal Police Department, (M.F.P.D.) is the Knights Templar's!

"When asked what is the difference between The Masonic Fraternal Police Department and other Police Departments the answer is simple for us. We were here first! We are born into this Organization our bloodlines go deeper then an application. This is more then a job it is an obligation.

"The Masonic Fraternal Police Department (M.F.P.D.) is a Masonic Sovereign Jurisdiction (Municipality) located within the incorporated City of Santa Clarita, California. The Chief of Police is Honorable Grand Master David Henry 33º was elected and is Governed by a Grand Supreme Council, and 33 Masonic Jurisdictions. He currently oversees a 1/2 Million members throughout the United States."

Would you believe they were for real? If so, then you too can get arrested for not actually being a police officer in one of the 33 jurisdictions where you thought you were one. Don't pass up this opportunity to make a total fool of yourself ... and embarrass a potential senatorial candidate! It's a once-in-a-lifetime chance. 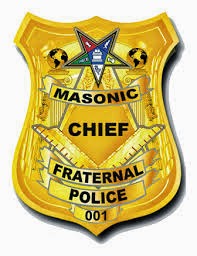 It's like a "Sargeant=at-Arms" position. They can probably discipline members but don't have legal jurisdiction outside of the organization, which is VERY old. I have friends who are Masons and can probably tell you more, although there's a lot of lit on them, along with a slew of conspiracy theories -- which you've no doubt heard about.