The many enemies of Christianity

Somehow I managed to resist writing about how the death battle between same sex marriage and conservative Christians for twelve days, but that reprieve is over. I'm back to the topic again because of the hyperbole of Rod Dreher (the main conservative-religious writer whom I read).

Dreher has blamed the Reformation for this evil before. He's blamed the Founding Fathers and their political philosophy that guarantees the state wouldn't impose religion on the people. He's blamed Martin Luther. Now he's blaming nominalism, a philosophical theory that perfect, ideal things don't actually exist.

I think Dreher should just go all the way and proclaim that the problem is that too many people think, and their thoughts are too often sacrilegious because they end up questioning the dogmas of the church. Somehow, though, Dreher exempts himself. When he questions the church, as he did when he left Catholicism to become Eastern Orthodox, it wasn't a hateful, uppity, and sinful of him to do that.

However, when Martin Luther questioned the Catholic church, he unleashed an incredible amount of evil. All sorts of people started questioning church dogmas and finding alternative ideas. For example what is more likely to be correct: your priest or your conscience? Is the Church correct that the sun and planets revolve around the Earth? Somehow this questioning is the direct cause of Western civilization becoming decadent and materialistic, and forsaking the guiding principles of a religious life.

Does Dreher actually wish that he could shut down all of that thought, remove the free will of people, and force people to put unquestioning faith in whatever their church says? From what I've read, that is what Dreher would prefer, based on the number of column inches he's devoted to defending dogma ("what Christianity actually is") and decrying the wrongness of guys marrying guys.

Oh, the hubris of using your brain! (... if you might come to a different conclusion from that of the Church).

A moderate problem in Dreher's argument is that Jesus himself is an example of questioning orthodoxy. But Jesus is the Son of God, and inerrant, which no other human is. So it's not illogical if Jesus can question but the rest of us can't. An even bigger problem is that humans are questioning authorities all the time, especially when they aren't thrashed within an inch of their lives for doing so. Maybe European stock is somewhat worse in this behavior than others (how frequently did Indians question their caste system?), but it has been a persistent trait for as long as we have records.

People are going to use their minds, and what they think may change as a consequence. God can't stop it, and neither can Dreher. If it is to be labeled a sin, that tells us that Dreher or the Church or God can't deal with a major aspect of human nature. It also raises the question of whether Dreher believes that people deserve freedom, or whether instead they need the cossetting of an authoritarian system to avoid this worst of sins--thinking the wrong thoughts.

Of course, what is most likely is that Christianity wasn't threatened by Martin Luther, the Reformation, liberty-based government, or a metaphysical theory I hadn't even heard of (and me a philosophy major!). Only Dreher's mistaken and narrow definition of Christianity is threatened and only in his mind. 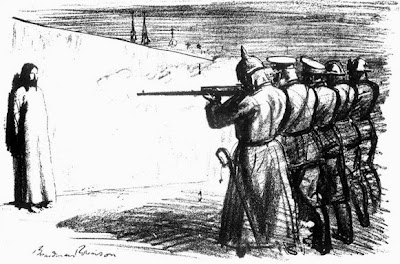 Extras. Well, the threat's not quite "only in his mind." Traditionalists in some professions have been sued or fined for not working on same-sex weddings. There are also allegations of jobs lost or discriminatory work environments made by traditionalists.

Religious observance and religious identification are also becoming less common. Is that due to people choosing for themselves too? Most likely.
Posted by ModeratePoli at 9:03 PM

Given everything supposedly devout Christians have done to lord it over the rest of us, I'd say anything they find objectionable and an attack on their faith are chickens coming home to roost.

The fundamental problem with dogma or orthodoxy is that it's the weakest form of evidence and testimony they can offer, yet they seem to want to insist it is the strongest. "I believe" should be driven from the lexicon of public discourse, in favor of "I conclude" or "I surmise". For it's more traditional use as a declaration of faith, might I suggest "I guess" or "I wish" is more appropriate and accurate, because that's how non-believers here it and, naturally, don't take it very seriously as a result.

So to echo your thoughts, those people who decide to use their brains and eyes to make up their own minds come to the less dramatic but more sturdy: "I conclude that it doesn't matter if people I don't know decide to get married or not, but the law should provide equal protection."

This actually echoes the famous play and movie Inherit the Wind, based on the Scopes case, where religious dogma gets trounced by logic, but ignorance continues to demand fealty to that dogma to produce a pyrrhic victory. I'd say they had the Pyrrhic victory with DOMA, and all those state laws enforcing their beliefs, but now the final loss is coming and Dreher's and others statements are just sour grapes.

The next stage is easy to predict. Dreher and others will blame anything negative on the other side's victory, so they can claim a) victimhood, b) a declaration that they were right all along, and c) underground attempts to re-establish their version of the Christian caliphate wherever they can. Sad.

@dangerous, The problem of dogma is difficult for religions because its area of interest (spirituality) doesn't have a lot of empirical material to work with.

So if they don't have dogma, how can they structure the religion? Some Christian sects have gone a long way to elevating the conscience of the individual believer, making that believer answerable to no one but God. Others have gone the route of handing the decision making to the elders (the men in charge), which is similar to the Catholic Church.

However, most sects have managed to work within liberal democracies, adhering to some limits and enjoying the benefits, like not having the state issuing religions talking points or lists of required beliefs.

Dreher has really gone off the deep end, and forgotten the huge benefits of liberal democracy, all over the issue of same-sex marriage. He ought be asking himself whether he rather be living in an authoritarian country or a theocracy. Is the change in marriage laws such an affront that authoritarianism or theocracy would be better?

Oh well, passionate people do go off the deep end. I recall Andrew Sullivan doing it a few times too.

One thing to remember, however, is that some people are immensely uncomfortable if they can't rely on some kind of authority for opinions or ethical or religious guidance. They depend on authority, and very much mistrust an opinion that isn't grounded in authority. They do have a point. After all, who would be more trustworthy: the 2000 year old Catholic Church, or Scientology, or even a [crackpot] philosopher down the street? If you don't trust your own judgment, probably you should go with longevity.

Dogma is fine as a structure for guiding one's own life and decision. The issue seems to be when preaching shifts to enforcing, particularly on those who do not accept the dogmatic premises or commands. That's the reason for separation of church and state, freedom of religion, etc. protections in the Constitution.

So I'd say Dreher has it backwards. He's requiring compliance with a law that never should have been set in the first place because it's there to enforce a dogmatic view of marriage for others, simply because his (and others)dogmatic view of what they want the institution to be. Fact is, it's none of his business who decides to marry whom, and it's not the law's business either beyond minimal intrusion to insure compliance with laws where society does have an interest (e.g. mutual consent for a contractual commitment or public notification of the creation of a new family entity).

Such limited bossiness is anathema to people like Dreher, who demand their freedoms but don't want to grant them to anyone who doesn't accept and follow their dogma. So they try to make excuses to enforce, such as their freedoms are reduced if the orthodoxy is not enforced, society at large suffers, others take on more cost, or risk, or inconvenience and so forth. At that point, evidence hardly matters to them, except when they cite something like a florist who got sued for discrimination because they confused religious dogma for freedom from legitimate laws.

Nobody is telling Dreher and his ilk that they HAVE to marry someone of the same sex. They just can't use the law to prevent others who want to from doing so. If it offends them and they don't want to live with it, tough!! Close your eyes and pray, and pretend it isn't true if it helps you get along.

I'd love to get one of these people on the stand and cross-examine them. They might even have to face their own hypocrisy.