Questioning whether Ted Cruz is an extremist

I've seen Ted Cruz labeled an extremist so many times, and that's generally my own impression, but I forgot to actually ask the question whether he is an extremist. Does Cruz actually hold extreme positions? His most well-known position was being against Obamacare, which is so common among Republicans that it can't be called extremist. So I wondered about extremist positions--whether he's advocated truly extreme positions such as deporting or locking up large numbers of people, establishing religious tests for civil rights, overthrowing the current government by insurrection, or some such.

I don't remember any policy position like that. But where did the impression of extremism come from then? It could be his rhetoric, such as calling Obama an apologist for Islamist terrorists. That's an extreme thing for an elected official to say out loud. It's more typical of political shock-jocks, not those who are supposed to be responsible, judicious, and fair.

Looking at Cruz's rhetoric, it's easy to find violations of the norms. He'll imply that Obama is a totalitarian, or that former senator Chuck Hagel was in the pay of North Korea. He'll advocate carpet bombing in the Mideast, as though carpet bombing didn't mean killing or wounding every living person in the effected area. It's the equivalent of say "Kill them all and let God sort them out."

His associations are scary. His father, Rev. Raphael Cruz, who frequently campaigns with Ted (making it hard for the son to distance himself) says such things as Obama is trying to destroy Christianity in the US. Other extreme associations include supporters of Uganda's death penalty for homosexuals.

Cruz's tactics aren't mainstream. When the GOP in Congress was voting in vain to repeal Obamacare, Cruz encouraged the 'defund Obamacare' strategy, though perhaps it was rhetoric and not meant to be seriously followed as a strategy. Nonetheless, it led to a government shutdown, and Cruz got much of the credit and/or blame.

I'm not sure I can point to other tactics that might be considered extreme, so I guess Cruz's extremism is primarily in his rhetoric and somewhat in his associations. But there's plenty of that. Just Google it. 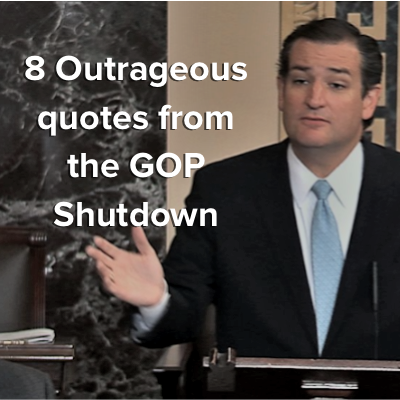 Extras. Quite the catalog on Ted Cruz at Right Wing Watch. Outlawing abortion without a constitutional amendment? Totally possible. Here are those 8 outrageous quotes. A fake Cruz quote, so don't trust memes.
Posted by ModeratePoli at 3:47 PM

"Extreme" itself is a rhetorical label, and one that Cruz and his fellow GOP throw around all the time as an effort to label their political opponents as not worthy of serious consideration. Labeling something as "extreme" is more of an opinion than a fact one can establish to any level of proof. Even the label "Islamist Extremists" is an opinion, whether widely held or not, not a fact.

What you can say about Cruz is that he's both ruthless and uncompromising. So if he were ever to have real power -- as opposed to rhetorical influence -- on policy, you have to take him at his word on how he would exercise that power. Hence, when he says he would carpet bomb Iraq wherever ISIS might be, he WILL order that and any calls for restraint or reconsideration of his ideas will be brushed aside.

If he says he's destroy Obamacare, that's exactly what he will do without regard for the people who rely on it for life or security. His stated position of "tough shit, Obamacare is evil incarnate" is not subject to any factual refutation in his world. For Ted Cruz, rhetoric is fact.

In Trump's world, he has come to believe his own hype because he is saying it. That's typical salesman schtick. Cruz is similar but with a strong sense of righteous warrior, as in what he says is not simply salesmanship; it's the word of God. His God. Your ideas about God don't count.

The only Republicans who seem to express any kind of self-reflection are Bush and Kasich. As such, the GOP primary voters would never consider them, since less than 100% certainty that they are right and in line with the worst impulses of GOP voters opens the door to cognitive dissonance, which could blow up the whole thing. Unless Democrats are evil and wrong and trying to destroy America -- despite their greater numbers and the relative success and popularity of their policies -- what exactly do Republicans have to offer?

So you get these standard, inflexible and, yes, extreme positions coming from Republicans, which all their candidates and most of their core voters agree with, but are a minority position of most Americans.

1) Democrats are trying to destroy God's laws via promotion of homosexuality, promiscuity, and supremacy of civil authority.
2) Americans -- as long as they are white -- have an inalienable right to own and brandish guns.
3) America is so special that anything a Republican leader says is just and right, but Democrats just want to bring America down because they don't agree that America is perfect when Republicans are in charge.
4) Any attempt by the government to protect Americans from adverse economic consequences is both doomed to fail and will succeed so well that it will destroy the economy.
5) America is a Christian country which tolerates other minorities as long as they acknowledge they are minorities and the tolerance is a gift bestowed by real Americans. (Jews now count as benign because of their long ware with the more hated Muslims.)

I know that you'll try to argue with me, MP, but I'm sure you can find quotes and policies from both GOP leaders and rank-and-file voters who echo these "extreme" positions -- at least as far as the Constitution is concerned -- without any self-reflection or self-questioning. Ted Cruz, because he's probably the most clever and ruthless, is probably the most dangerous, like Nixon without the self-loathing.

Unfortunately, the Dems seem intent on nominating Hillary Clinton, a perfectly competent and reasonable politician, with all the skills and flaws that profession entails, but who the Republicans have successfully labeled as a liar simply because she has enough self-reflection to recognize when to soften the message. If we had a Lyndon Johnson in the stable right now, the Dems would slaughter any of the Republicans.

@dangerous, I'm not planning on staking out the opposite of what you say. My post was an exploration, not a polemic. You're probably right that Cruz is both ruthless and uncompromising. I'm not sure because the presidency does tend to moderate the bearer. Also, Cruz hasn't been in such a high office, so there isn't history to go on. Frankly, this is an experiment I hope we don't run. I don't want to find out what happens.

The reference to Nixon was a great touch--very witty.

As for the Dems not having a good candidate, I fully blame that on the Dems. They seem to have put everyone into a blender and totally homogenized them. Sure, Liz Warren and Sanders are still a little crunchier than the rest, but there is barely anyone to the right of Hillary except Joe Manchin. I think the Dems need the DLC again, but there isn't anyone to lead it. Instead, we have Nancy Pelosi's healthy, bland smoothie of a party. Blech.

I disagree that the Dems need DLC. Hillary is still the poster child for it, maybe a bit to the left of Bill but no much different except in style. Manchin may be the right-most Dem at the moment, but mostly that has to do with West Virginia, God and Guns. If he wasn't, he would be tied to Obama, who they hate in that part of the country, primarily based on race, but also because he's an elitist Ivy Leaguer. The mix is like Valium and booze -- it multiplies.

On the GOP side, except for Kasich they are all WAAAAYYY right of the old GOP. Kasich is where the right used to be for the GOP, a la Reagan. They won't compromise. They all bluster. They all blame Obama for everything and give zero credit. That's what their voter base wants.

The Dems need better messaging. Instead of Sanders' soak the rich rhetoric, someone should try "make the rich pay off the debt". To combat the irrational fear of terrorism being a personal risk, instead of talking about attacking ISIS abroad, they should try messaging about citizen vigilance at home against ALL possible random murders, whether inspired by religious, political or personal motives. They refocuses people on their responsibility to their neighbors.

And so on. The GOP is fine with their messaging (except when Trump goes off the reservation by being too candid and alienating swing voters). The Dems clearly aren't comfortable with theirs. For the past 18 months, every time one goes before the cameras they should use the line: "Jobs are up and gas prices are down." That would work for both Manchin and Sanders.