Short: Who's selling out whom in the GOP?

I didn't notice last night, but there's a snafu going on in the GOP right now. It seems that after goading the GOP for months to defund Obamacare, and within hours of the House announcing that it would try to do so, Ted Cruz announced that the Senate won't go along with that.

This shouldn't have been news to anyone. Dems hold the majority in the Senate. There is no way on earth that they were going to pass a continuing resolution that defunds Obamacare. So why is this news to various GOP congressmen or GOP constituencies? Perhaps some operatives have been spinning a story and forgetting (wink, wink) to mention a couple details. And perhaps some incredibly foolish people in the audience didn't realize this.

Now a bunch of people are pissed, and others are trying to quell it. Here are some of the reactions from HotAir:


Strategic: "I don’t understand the anger and angst towards Cruz. What has he said that he hasn’t always said? And did he say he was caving himself? The reality has always been that only the House can defund ObamaCare. If the House doesn’t agree to a CR, then there’s no CR."

Pissed: "Vichy Republicans: If you do not stand firm against Obamacare, and try hard to stop it, I hope you have a job lined up after 2014."

Even more pissed: "You lying sacks of %#^?~{€*?. You’re not getting money from me or my new generation of voters me and Mammy is influencing. We’re not walking door to door for you. We’re not working phones for you. We’re not supporting one freaking #^*+!{]~£ thing you push unless you DEFUND OBAMACARE and STOP PUSHING AMNESTY!!!"

Cruz lied? "I went to Cruz’ event in Dallas. They specifically said this was not true. They said if you shut the government down, the statutory spending in Øbamacare does happen. However, if you defund the whole program, no spending on it happens at all."

Resolute: "We need to be their backbone – or broomstick if you will."

Resigned: "Lord save us from this ridiculous soap opera. If there were really the votes to undo the ACA in a meaningful way — something I strongly favor, by the way — they could just repeal it. The idea that R’s, controlling one branch of Congress, can defund a law that they lack the votes to repeal is a fantasy."

I think this disagreement will blow over... until the strategy fails, if it does as I expect it to. Then there will be more recriminations among the GOP. I'm not going to guess what those will be. I refuse to even try crawling up into those reptile brains. 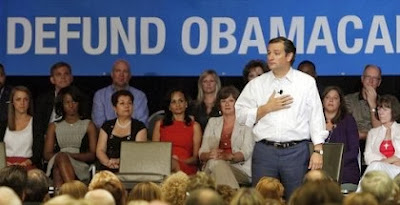 Extras. A boring explanation of the plan using a checkbook metaphor. When you look at the details, is defunding even enough?
Posted by ModeratePoli at 8:21 PM

I'm following this closely and I think a poker analogy is apt.

Some in the GOP think they hold a winning hand and want to go all-in on defunding Obamacare and think that those who aren't so sure are either chicken or not committed to the cause.

Others in the GOP want to go all-in on defunding Obamacare because they don't care if they have the winning hand or not as they aren't playing with their own money.

Still others think that they may not have a winning hand on defunding Obamacare and that Obama will care their bluff for sure.

Others think that if they go all-in Obama will be forced to fold even if he has winning cards.

Of these factions, although they all want to win the hand in some way, none is strong enough to enforce their will on the others. The senior insiders know bluffing is a losing strategy because unless you're sure your opponent is weak and will fold, his weak hand may be better than your weak hand.

Besides, Obama is practically all- in on Obamacare anyway, and you can't get someone to fold even a moderately strong hand with so much in the pot already. It's not like Obama is facing re-election.

So Obama has a medium-strength hand -- something like a high two-pair. It's not strong because polling on Obamacare doesn't favor him. Hence, some in the GOP (e.g. Ted Cruz) think that if they act REALLY STRONG Obama will give in rather than see the country harmed with a shutdown or default. Unlike real poker (but like it's often portrayed on TV and the movies) Cruz & Company want to reach into their pockets and pull out a huge wad to add to the pot to make Obama do the same to call.

This is not allowed in real poker -- where it's table stakes -- and the cautious GOPers know that once you change this rule in politics the risks get very high. Obama knows it, too.

I don't think the GOP is ready to cross the line into obviously taking the entire country hostage, since their rhetoric on Obamacare is so divorced from reality and smart GOPers know it. But Cruz doesn't seem to mind putting the GOP brand into the pot because he's an outsider to them anyway.

Cooler heads will prevail after the GOP brand loses a chunk of its value, but nobody will learn anything on that side. They are willing to lose exactly as much as they think they will from Obamacare being seen as a success.

@dangerous, what, in your opinion, constitutes "the GOP brand los[ing] a chunk of its value"?

In my calculation, pretty much the same people will be put off by the GOP shutting down the government over Obamacare as will ultimately find Obamacare is a) not nearly as bad as the GOP painted it and b) there are some good things about it for them personally, even though they opposed it and might still do so in opinion polls.

The GOP will not mind losing those voters who might eventually discover that the GOP should not have grandstanded on defunding Obamacare at all costs in the first place. It will be worth it to keep their base motivated and hating, hating, hating.

But once they start losing support from people who won't see much from Obamacare or lose a lot from a government shutdown or default (e.g. GOP-leaning business interests), they'll fold and will hold that support despite what Ted Cruz and other firebrands want.

I don't have the survey numbers to back it up. It's just a hunch based on years of observation.