Conservatives have had an interesting line of argument: (bear with it... for now.)

Well, that's how the argument goes. There is a simple, step-wise logic to the argument. It's actually the mirror image of the Democratic argument -- the DEMS aren't the ones who want to shut down government; the DEMS want government to keep going, but WITH Obamacare; it's the GOP who are shutting down...

See, the arguments are mirror images. They work for both sides or for neither, which is intensely frustrating and leaves me wanting to yell "But... but...."

So, if the shutdown happens, who will be successful in selling this argument which works for either side? I want that question to linger here for a while.

Let's assume that both the Dems and the GOP have their bases locked up.

So, although the GOP was successful in making Obamacare somewhat unpopular, I don't think they were successful enough to get Americans to support chaos for the sake of blocking it. But we shall see. 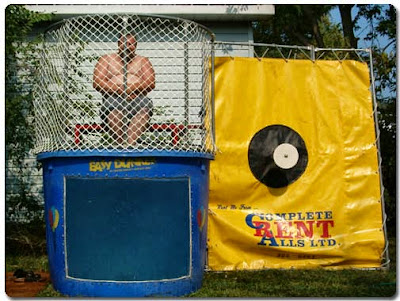 Who will end up in the dunk tank?
Image: www.completerantallsorillia.com

Addendum 9/29/13. The shutdown arguments of the Dems and the GOP are mirror-images, but this argument does favor one side.

This shows how they aren't the same argument.
Posted by ModeratePoli at 7:20 PM

Yes, these arguments are mirror images, but only one side is legitimate. The Right's position is one never taken before, for a reason. Any coverage or discussion of this topic should be pointing out the truth - that this is an unprecedented hostage-taking which has long-term ramifications for our country's political future - not just legitimizing the GOP's thuggery as equally worthy just for PC or "balance" issues in the media.

This is not the time or place to try, once again, to get rid of an actual law of the land simply because you want to. A Republican Congressman admitted on MSNBC this weekend that part of all this is to help freeze the program until the 2014 elections, since the GOP is hoping to win the Senate and get rid of the law.

So, the actual story being covered should be that this is just the GOP finding another method of gridlock and nullification, that the GOP is trying to negate the last election's results while already setting up the argument that the NEXT election's results WILL be legitimate ones.*

*Disclaimer: Any actual admission of legitimate election results will be predicated on the Republicans actually winning. If they don't, please go back to our regularly scheduled show. Sorry it is a repeat.

In my addendum, I show the argument that clearly shows the difference between the GOP trying to overturn Obamacare and the Dems defending it. I guess I'll edit and make it clearer.