Rant: The stupid strategies of the Tea Party

OK, the last post was the polite version, asking the Tea Party to please, please use their power for good, reasonable purposes. This post is the rant.

The Tea Party really deserves the comparisons to a child having a tantrum. Why? Let's look at its strategies:
That's it-- that's the entire Tea Party playbook. Just look at what happened when the House GOP actually caved to the Tea Party demand and passed a continuing resolution with no funding for Obamacare. The Tea Party guys in the Senate had no plan! They had to figure it out the next day.

What is their plan for when the Senate strips out the defunding for Obamacare? Is it "Don't Blink?" Is it "wait for the other guy to cave?"

What is their plan if the Dems refuse to go along, there is no continuing resolution, and the government goes into shutdown? They haven't prepared a plan. They haven't told the public what to expect--which services will continue and which won't. What is their plan when offices of their members of Congress are deluged with angry callers? They have no plan.

That is how paltry and stupid the Tea Party is when it comes to planning. You are fucking kidding me! The Tea Party is amazingly stupid, yet they have a lot of support among traditional Republicans. The lesson here--there are way too many stupid Americans. This is embarrassing for me and my country.

Yeah, I know they feel the same way about me and millions of others. I don't know what to do. Sigh. 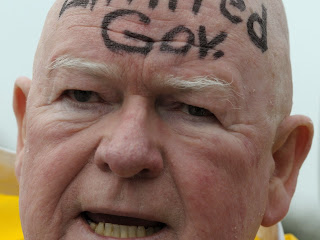 @Ben dem, I removed your comment because it violated my rules for comments. This isn't a place for gratuitous insults. Watch your language and you'll be welcome to comment again.

To be completely clear, you can't call anyone an ignorant fuck on this blog.