Is Obamacare ALREADY a train wreck?

Everyone has heard this. Obamacare is a train wreck. Well, I don't take anyone's word for it. As I frequently tell other internet commenters, your assertion doesn't make it true. So what is the evidence that Obamacare is already a train wreck, even before exchanges crash, subsidy costs balloon, and healthcare providers are so pissed off that they give surly care? 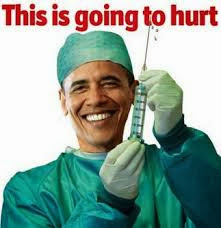 Extra. Obamacare will explode medical spending, just like Medicare did. I have a few obvious questions about this, including asking about the effect of covering mostly the healthy instead of the elderly. But the kicker in this article is that Medicare didn't positively affect mortality rates. Um, does that means Medicare is an expensive failure? Please defund Medicare immediately and see how that turns out.
Posted by ModeratePoli at 8:07 PM

I was waiting to comment on this post until I learned a little more about the Obamacare exchange rates for my state.

It's clear that the rates are far LOWER under the exchanges than for comparable benefits insurance companies offer now -- if they offer them at all. I had been turned down by major carriers and not because I have any clear or expensive pre-existing conditions. I'm a little overweight per their "charts", not that it takes into account build or conditioning or anything. (I am overweight but not really obese.)

Nonetheless, if I wanted the equivalent of the "bronze" coverage from Blue Cross, I would have had to pay about $800 per month. Under Obamacare, I expect it to be about $300 per month. And that's without subsidies since I earn too much.

Next, I foresee that many, many employers are going to be furious with their carriers for charging many times the Obamacare exchange rates for their group health coverage. I work with lots of payroll and HR departments in my work and typical family coverage has a premium approaching $1500 per month, with individual coverage around $500. Some employer deduct from employees for some of that, others don't.

So I expect some employers will see that it makes more sense to end their health plans and have employees sign up for Obamacare. Some will pay employees more, others won't and will pocket the difference. Then again, employers were doing that anyway, either not giving raises or increasing co-pays or offering cheaper plans or dropping coverage altogether.

But Obamacare was not the cause for those actions the past 25 years and it won't be the cause now. It may be a trigger, but employers will always look to cut costs, consider the full expense of hiring anyone. Naturally, opponents will loudly cite examples of those employer actions and blame Obamacare. They'll ignore the facts of life before Obamacare and refuse to acknowledge that employers took all the same types of actions due to RISING HEALTHCARE INSURANCE PREMIUMS.

Further, I don't expect critics to note how much individuals and employers have received back in rebates due to the 80/20 (ind) and 85/15 (emp) rules, and how those rules are keeping rates down either on the front end or via back-end rebates.

There will be disruptions to some individuals, of course. But what opponents are MOST upset about, although they won't say so, is that poor people will receive subsidies for health insurance. Those subsidies will be paid for by the wealthy. Hence, between their devotion to their health insurance company benefactors, and juts generally wealthy people, the GOP is apoplectic that their constituencies are the big losers with Obamacare.

So I'd like to go on record and certifying that Obamacare is a stunning success ALREADY, just via the 80/20 rule and other reforms. When the American public and benefits administrators in businesses see how they've been ripped off all these years, they are going to demand rate cuts or their will just pay their people to go on Obamacare via the exchanges. We may not even need the public option.

@Dangerous,
Thanks for the report on rates in PA. Among the GOP/Republicans, there is an irrational hate of Obamacare. How can I tell? Because the rhetoric is so over-the-top: It's a takeover of 20% of the economy, it will drive up medical costs and bankrupt the country, and of course DEATH PANELS!!!!!

Even in the Forbes article, only two out of the seven biggest problems with Obamacare hold water.

I really want to get Obamacare underway, so that the discussion moves away from killing it to making it better or more streamlined.

Health insurance companies have been ripping off businesses and individuals for decades now. People are going to now discover that and some will begin to question what took so long.

You should revisit this post, now and in 6 months

@rs, I've already written another post on the website (here). I'll definitely be revisiting it because healthcare and its cost is a major issue for me. Use the labels as the end of the posts to find more posts on the same topic.