The woes of healthcare.gov

This website is reputed to have cost $600 million to develop (well, maybe not that much), and it's a disaster. It freezes, people can't get through the signup procedure after hours of toil, the determined folks wake up at 4:30am to sign up, etc.

Some have said that this shows how ridiculous it is for the federal government to be involved in healthcare. Well, that's nonsense for two clear reasons. 1)Government is already involved a lot of healthcare like Medicare, Medicaid, federal employee healthcare, VA healthcare, and Tricare, among others. 2)It's a computer system problem. Any problems with the political philosophy are completely separate.

And it is a whale of a computer system problem. Kathleen Sebelius, the cabinet secretary in charge of the program, deserves to lose her job. She should have been all over this program making sure it was on-track. Obviously she didn't do her job. Whoever she had in charge of supervising the program also deserves to lose his job. This is a major cock-up, and I don't accept excuses. As someone who has been involved with computer systems since 1976, I can tell you that more difficult programs than this have been successful completed.

Sebelius will probably get to keep her job because it's too damn hard for her replacement to go through confirmation hearings--which is a reflection of a different area of dysfunction in the government. I hope she will be firing others in the department she oversees. I doubt this will happen either because continued employment is the best bribe she can pay to prevent them from revealing the government mismanagement. 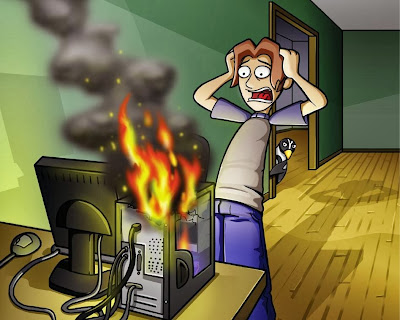 Extra. Some of the trouble was due to a decision to protect users from sticker shock:

Some (most?) policies cost so much that users need to be numbed by excessive bureaucratic form-filing before they see the cost. Not really--but it's best if they see the subsidized cost, not the true cost of the policy. That just shows they are moochers... unlike the rest of us who just don't know what healthcare really costs.
Posted by ModeratePoli at 1:59 PM

There are two fundamental problems with the web site design, neither of which is technical but that created significant technical challenges that ballooned into a bad launch:

1) The policy decision to require potential enrollees to create accounts and complete full applications before browsing their coverage options AND COSTS (more on that later), and

2) The policy decision to collect lots of income information to accurately gauge the government subsidy for 2014.

The issue which binds and underpins these decisions are that a) opponents have been falsely but effectively arguing that the insurance rates on the exchanges are very high (they aren't), and b) people who will get subsidies will face sticker shock at the list price and/or are not smart enough to evaluate their options based on just an estimated final costs.

Let me say that these are valid concerns and completely reasonable bases by which to require certain designs of the web site. If they did it the other way -- let people browse at full price and/or with estimates of the subsidy they would receive, critics of the Obamacare would cherry-pick their numbers and many people would believe them and not even check it themselves.

As a healthcare.gov user, I found this design very annoying, but I didn't get sticker shock at just how much insurance costs. But I can foresee that most people's reactions to the full price would be "I can't afford this." But the subsidies are substantial for many Americans.

In retrospect, they should have designed the site for plan browsing, allowing the user to click a few buttons based on age, smoker, and estimated income, and then included a big red label on every screen warning "Lark's Vomit". (Monty Python reference, sorry.) People being how they are, a warning that actual premium they will pay will depend on the data on their application, that would probably not suffice for some. Any deviation from what they expected would create more problems.

So I'm giving them a pass on the crappy design and execution provided people can sign up when they have to in order to have the coverage they want and need. Despite my problems with it, I did ultimately create an account and I could sign up for coverage today. I'll wait until it's closer to the end of the year since there's no point paying now for something I won't need for another month and a half.

New info -- You can now view plan options and estimated costs, with relevant disclaimers and reminders about subsidies, without creating an account. They added a button for that on the landing page yesterday or over the weekend.