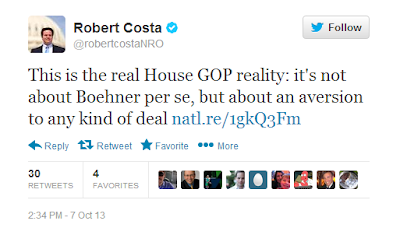 This is from Robert Costa, the National Review reporter who has the best inside information at this point. Is anyone surprised by this? It's been clear to me that the Tea Party Republicans didn't want to negotiate, so the talking point that THE DEMS WON'T NEGOTIATE was fake. Why do they pretend? I assume the media demands sound bites, and you can't give them the unvarnished truth. [If I had a TV channel. I'd play a laugh track after one of these sound bites, but I'd probably get cut off by every politician. But enough musing.]

This is why no one's elected me or given me a network to run. Thank God for blogging!

Almost forgot: One way I knew the GOP didn't want to negotiate--they didn't remember this option until September 30! All of, maybe 4 hours before the shutdown.


"The House, led by Senators Cruz and Lee, on the path of small funding bills, has shown the public the GOP is willing to be reasonable on all issues except Obamacare."

I don't need to give a dictionary definition, but responding with a flat "no" and holding to one's position is negotiating.

It stands for "best alternative to negotiated agreement". This is critical to understanding all negotiations and in this case President Obama has an excellent BATNA and the GOP has none. That's why they reduced and reduced and reduced their demands.

Now that the shutdown is running, and the debt limit is approaching, the GOP thinks it changes President Obama's BATNA. They might be right, but it changes theirs, too, and probably in a far worse way than for the Dems and the president. Public blame for any default will completely fall on the GOP, and negotiating with hostage takers is not a favorable long-term plan.

In a dispute, forcing negative changes to the other side's BATNA is a common strategy and for the first time in his presidency, President Obama is employing it as effectively as the GOP did from the time he was elected. If you play your moves effectively, you can move the terms of any eventual agreement in your direction, even to the point of unconditional surrender.

We are actually at that point now for the GOP. They are in what is termed in chess as "zugzwang": any move the GOP makes leads to a loss and it's their turn to move. They can 1) resign, 2) make a move toward eventual and inevitable checkmate, 3) move and hope President Obama makes a mistake and lets them off the hook, or 4) kick over the board.

Your guess is as good as mine on which it will be. I suspect Boehner will choose option 3), but if he is faced with option 2) he might choose option 4) since any other outcome means the end of the modern GOP.

BATNA for Obama (and the Dems) is to hold to their position that the House pass the "clean" C.R. and debt limit increases, since political blame for failure to do so will fall disproportionately on the GOP. This is similar to allowing a case to go to a (civil) jury rather than reaching a settlement.

BATNA for the most of the GOP is probably a quick and quiet acceptance of a clean C.R. to reopen the government and raise the debt limit to avoid the balance of the blame. That's not a pleasant prospect for them, and perhaps they see their best BATNA is to stall. One could argue that different portions of the GOP have different BATNAs, which creates a much more difficult situation for them, particularly if they value cohesiveness over their collective BATNA which serves some of their members more than others.

You see why they are most effective when they stick together and pretend that their BATNA is better than it really is. That is, powerful members will not accept any negotiated agreement other than a surrender by President Obama. So the GOP really has no BATNA since they have nothing to bargain with, no leverage, and an opponent whose BATNA is to let them rot.

The way you determine BATNA is placing yourself in each party's shoes and take a dispassionate look at the realities. Boehner might be willing to do that. Others in his caucus would rather shut everything down and just blame the other side. So the argument is not between the GOP and the Dems, it's about the BATNA for the GOP among its caucus.

For a thorough understanding of this whole process, check out Getting to Yes by Fisher and Ury.