Short: Who fixed the financial crisis?

According to some highly biased or highly ignorant people, Obama caused the financial crisis and the deep recession that accompanied it. For others, it's Bush, Wall Street greed, Bush, lack of regulation, atrocious corruption in rating agencies, more Bush, etc.

It's a relief to read that the financial crisis was fixed so long ago that it was completed before Obama was sworn in. That's the view of two of Bush's economic advisers. They make a good case: the financial crisis was over, but Obama was left with (one helluva terrible) recession. Some of their conclusions run counter to the conventional wisdom or usual conservative drivel:
I'm not going to read the 25-page explanation for these conclusions. However, I did like this much shorter narrative. Here is their quick explanation of their capital flow hypothesis:

"The flow into risky assets drove down credit spreads, making high-risk investment cheaper than it had been in the past. As a result, in the mid-2000s risk-taking increased dramatically, especially in the housing market."

My translation (possibly erroneous): Investors who wanted to avoid the panics that occurred in Asia and South America during the 90's decided to invest way too much in the US and Europe. It was too much money chasing after too few good investments, so money sloshed into poor investments like subprime mortgage lending and housing booms.

The more I think about, the more I wonder if that explanation works. Would it have been significantly different if the money had crashed elsewhere in the world? If so, why? 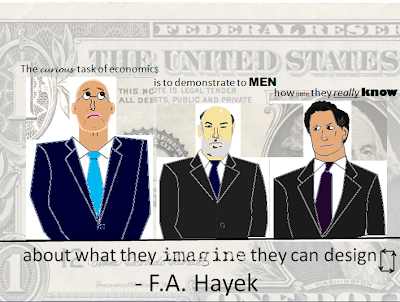 I was a combination of factors. Example, if it had not been for deregulation allowing for banks to get so big, the influx of cash would have had less of an impact. this can be restated about many of the factors in combination.

Also, there is a argument for letting GM and Chrysler fail, even if chapter 11 would not have worked out as conservatives said. The "creative destruction" of capitalism needs to work sometimes. GM failing would have hurt a lot but we don't know what would have come out of those ashes. What ever it was would have been leaner and more efficient with its available resources.

@rs, I agree it was a combination of factors. The size of the companies certainly made it worse. I'd love to see much tighter regulation of that, but they will fight it as hard as they can.

I strongly disagree that the car companies should have been allowed to fail--not then. We were teetering on the edge of depression, and there wouldn't have been any 'creation' after the destruction. In normal times, definitely let a company go bankrupt. I'm not sure why you wouldn't bend the rules considering what was happening. Please explain. Also, read my post on the topic if you haven't already.

Thanks for commenting. I welcome thoughtful comments like yours.


I'd love to see tighter regulation also but I think that we must acknowledge that it isn't just the banks/business that fight the regulation change. They will lobby hard to keep the status quo but also keep in mind that politicians also do well when the economy does well and any regulation shrinking banks will have a negative effect on the short term economy (either as a loss or slower growth).

As I talk about the auto bail out please keep in mind that I am fully aware of the consequences of letting Gm and Chrysler fail. I understand that it is not just the companies but the hundreds of support companies and those jobs also. That said, you want me to explain why would I cut those jobs out when we were edge of depression. I can't sell you that whole cow in one reply but basically I believe we are still on that same edge. That is the long of it, the short is that I don't like unions and I don't like the UAW. I don't like the fact that GM gets away with being bad at running a business. The only way to shake all of that loose is to let it fall apart.

We can't know what would have happened if we let GM fail, it certainly would not have been good over the short term. The difference is that I see bad outcomes as the one that a GM bankruptcy would have caused as STILL extremely likely.

@RS, so you tip your hand. You love the dividend of killing the UAW so much that you don't hesitate to kill two US auto companies and possible all or almost all of the US auto industry. That's behind so much of the supposed principled stands on investor rights. It's no surprise to me. I see these ulterior motives clearly enough on both sides. But I don't partake. I'm upfront on my reasons for what I support. You, only when you're pushed. Why don't you drop all the obfuscation and just cut to what you really what to see? You appear to be rooting for a depression. Why?

tip my hand? I wasn't hiding anything buddy it was the first rebuttal, i was answering your question ,lol. The auto companies and the UAW killed themselves. Ford got it done and they got no reward for it. We cannot have good paying manufacturing jobs in this country with the amount of drag unions like the UAW creates. I understand the purpose of a union and there are benefits but there is a point that the drag eats up too much. Have you ever work under a union? I do currently. Have you had a conversation with someone at a union manufacturing job. It is amazing those companies can turn a profit. I am not rooting for a depression, I just see the end of our growth based economy--- which ends in depression. Saying it is raining outside is just a statement of fact.