Here's how we'll know when the GOP are serious about negotiations:
Here are signs you won't see so don't expect them:


These developments are necessary to move ahead with negotiations. The GOP are going to be very pissed. However, horribly angry politicians still manage to make deals, so I'm not giving up hope even if both parties sound a billion miles apart and express utter contempt for each other. That will be the same situation as in summer 2011, which was the last difficult deal the parties made. (Who would have thought I'd look back longingly for those days?)

It's unlikely that the GOP will become serious all at once. There will probably be a short debt ceiling deal first, maybe just a few weeks. The next extension for a longer period will herald the onset of serious dealing.

Here is something I wish the GOP would realize: they've operated with just two approaches to divided government. The first was negotiation amid intense acrimony. The second was confrontation without negotiation. The first approach resulted in the Budget Control Act of August 2011. The second approach has resulted in the capitulation by the GOP. So, really, for the GOP, the choice is negotiation or humiliation. Why is this such a hard choice for them? 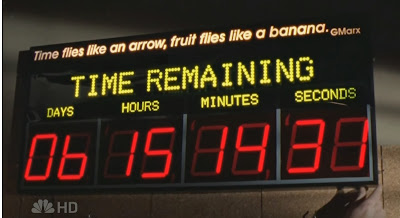 Posted by ModeratePoli at 9:48 PM

"This will give time for negotiations without giving away leverage for an eventual deal."

This is exactly the reason why President Obama must not relent no matter what the GOP wants. If they can use government shutdown or the debt ceiling for leverage -- in effect holding the country at ransom -- it doesn't matter that they give the appearance of "no strings attached". The strings are still there!!

Leverage must come from the better argument and the will of the voters, not any artificial impetus. The GOP thinks they the better argument on taxes and spending, but they lost the election on that. So until they are willing to give up one of their sacred cows in the negotiation, they are not serious. They are just finding another path to get the president to relent.

So if the GOP does admit defeat on the hostage-taking efforts, and releases the country for even a short time to start "negotiations", President Obama should hit them with HIS demands: infrastructure and a jobs program, a promise to never shut down the government again, and the elimination of the debt ceiling -- and no changes to Obamacare that he and the Dems think will weaken the program.

Naturally, the GOP will immediately scream that Obama isn't negotiating in good faith and will return to hostage taking, this time saying they have no choice since the president is being completely unreasonable. (In their world, only the GOP is allowed to make demands and exercise leverage.)

At that point, President Obama must again stand firm and remind the GOP that they wanted "negotiations" and in "negotiations" both sides get to take their positions and if there's going to be a deal, both sides have to compromise. This is the real world when you lose the last election.

I like leverage, so I want more of it, not less. Right now politics have been frozen because there weren't many must-pass pieces of legislation.

I'm also glad that both parties have leverage. They manage to block each other generally in good ways, sawing off the crazier bits. It's also a way to express power without sending demonstrators into the streets. Thank god we don't have general strikes or groups blockading the highways.

Leverage that both sides have doesn't scare me anymore because I've seen that leverage isn't a blank check, as I wrote here. It's a reasonable thing and a strong strategy to stand up to those who overreach with their leverage.

So, as I said before, I don't want to take away leverage. I just want severe punishment for people who abuse it. So far the electorate has delivered that punishment quite effectively. Good on them (us, actually).