GOP stands up to the Tea Party Part 2

So many thoughts. Not so many complete sentences.

Tea Party not backing down. RedState doesn't want a house divided; it wants a house purged.

Tea Party is still behind its belief that Obamacare can be stopped/defunded/gutted. They pretend that this was the plan all along, to fight tooth and nail, close down government, do everything they can. But that's a story that only started over the summer.

In this article, RedState blames the GOP for not following through on defund promises, but all the early articles it refers to talk about broad fiscal goals, not Obamacare. I checked the RedState archives: Ben Carson, black neurologist hero of the Tea Party, had lots of complaints about Obama, not just Obamacare. In a February article, the focus was on governors refusing to set up exchanges. Search for "defund," "repeal," and "delay" in articles from that time and you'll see that it wasn't part of the vocabulary then.

Rush Limbaugh, another big voice (and big ego) for the Tea Party, isn't backing down either. He wants Ted Cruz and Mike Lee times 5 or 10 or 45 in the Senate. Per the Washington Times, the Tea Party is "poised for a major victory in the larger Obamacare War." Details absent, though. 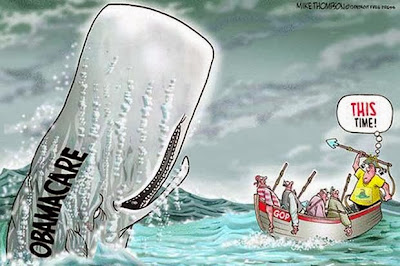 Extras. History of the shutdown per Politico. How the House voted on the measure to end the shutdown and raise the debt limit. How the Senate voted. Currently the Senate has about 10 senators with similar strategies to Ted Cruz/Mike Lee. After the 2014 election, who knows.

So many great images to choose from. Google image search: GOP stands up to tea party cartoon.

Another RedState article where they look at evidence but still somehow manage to draw the wrong conclusion--that is, the conclusion they want to draw.

Posted by ModeratePoli at 2:29 PM