... but probably not. Perhaps Boehner shifted today toward a fiscal settlement rather than insisting on emasculating Obamacare. But on closer inspection, it looks like Obamacare is still a central focus. Ted Cruz is saying that they need to mitigate the damage of Obamacare. Boehner is saying "It is time for us to stand and fight."

Somewhere I read that the GOP will stand firm until midnight of the Oct. 16, one whole day before the debt default. So in the final 24 hours, we may have another day of mad scampering, proposals launched willy-nilly, and Ted Cruz thundering with unblinking, blood-shot eyes all day. My guess is that if we get to the Oct. 16 without some bargaining, nothing on Oct. 17 will be enough to end the impasse. 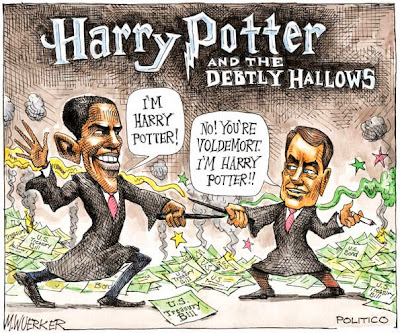 I'm not sure that we will get any "agreement" on anything. One side will win and the other will lose, just like in an election.

Further, the GOP doesn't want "negotiations" because that's what we have right now. Holding one's position is negotiation. The GOP did it for years. They might say they want "compromise", but really they want surrender and I doubt they will get it this time.

The reason I know it is the same as why Obama and the Dems know they have the GOP on the ropes, at long last. The "Hastert Rule" of the majority of the majority no longer applies. That's why Boehner says that the "clean" C.R. doesn't have the votes to pass. (Same with a clean debt limit increase.) From the GOP perspective, it's not that within the entire House there aren't enough votes. As the media points out, 200 Dems + 20 or so GOP is sufficient for either measure to pass. But in the GOP world, that's not enough votes. It can't even be 200 GOP and 200 Dems. Likely, that's what it would be in a clean vote to end the shutdown.

But what the media does NOT report is the truth. Under the "Boehner Rule", which is really the Cruz of GOP-only rule, the margin of passage must come SOLELY from the GOP. Then, if some Dems want to defect, or a few GOPers want to be obstinate, so be it. But it would take 217 Republican votes in the House for Boehner to bring it to the floor. That's the new rule.

The reason for the rule is simple. In the GOP world the Dems only exist to either defect or surrender. Either the GOP can pass a bill on its own or its some form of "compromise" or, Heaven forbid, surrender to the invalid Dems and evil President Obama.

I don't agree that the majority of House GOPers would vote for a clean bill. I think they're scared shitless of being primaried, so many are going to CYA by voting the Tea Party line. So Boehner's probably still following the Hastert rule. At least I think that's true now.

If the markets start freezing up, it would be a different story. When the non-TP GOPers can blame real economic harm on crazy TP tactics, that's when the conference splits up big time.

Well, that's my guess. I want to see that bust-up so much just to know that crazy can't last.