Crazy week for The Donald

Matt Glassman (via twitter): Is this the stupidest week ever in American politics?

Yes, it's been a crazy week. Last Thursday, the father of a Muslim-American US Army captain who was killed in Iraq spoke at the Democratic Convention and attacked Trump for his prejudice against Muslims. Trump unwisely has launched attack upon attack back at this family.

Attacking the grieving families of fallen soldiers--not a good tactic. Has Donald Trump adopted the tactics of the reviled Westboro Baptist Church? So it seems. And the conservative media is supporting him in these tactics.

Last night my sweetie was kept awake following myriad tweets about Trump's campaign falling apart. Campaign aides are suicidal. Paul Manafort, his campaign manager, is 'mailing' it in. Trump is feuding with GOP heavyweights John McCain, Kelly Ayotte, and Paul Ryan. The head of the Republican National Committee  (RNC) has called Trump to complain about how he handled the Khan family, and then leaked this information. The RNC has even checked on the official procedure for selecting a new nominee if Trump quits the race. (Source for part of this info.)

Hillary hasn't fared that well this week either. She went on Fox News and doubled-down on some claims that the head of the FBI already said weren't true. However, she also repeated that she wouldn't handle email that way again.

And it was uncovered that the US government sent $400 million to Iran on the same day that they released four American prisoners. Though this looks like a ransom, it wasn't a straight ransom, but part of a series of large deals with Iran settling old issues while setting up a new nuclear agreement.

However, any comparison of Hillary's week and Donald's week has Hillary is the big winner. Will it matter on Election Day? I certainly don't know. 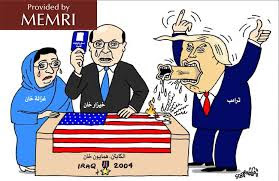 Extras. Lots of other sources. Other Republicans support the Khan family. Trump seeks support from Congress, gets little. GOPers trying to talk sense into Trump. Detailed discussion about Khan from Snopes. Trump against Kelly Ayotte. Campaign woes from Vanity Fair:


"The problem is that Trump watches TV every minute that he isn’t actually on his phone, either talking or tweeting. And then he gets angry at what he sees on TV and reacts."

Update 8/4/16. Was there or wasn't there an intervention of the few GOP leaders that Trump might listen to? Maybe there was, because Trump didn't insult the Khan family in the past 24 hours. However, Gingrich is now sadly admitting that Trump is blowing the campaign. Guiliani says "What intervention? There was no such thing. Trump is a great candidate." Well, something like that.

Update 8/7/16. The Huffington Post has a timeline of Trump's week, including additional gaffes and missteps that are too numerous for me to cover. It's rather stilted, and doesn't note the Trump toed the line on Friday. Still, a fun recounting of the many Donald blunders in an amazing week.

Update 8/8/16. A letter signed by 50 former national security officials says Trump "would be the most reckless President in American history." Maybe he'll retaliate by saying he's 'not there yet' in deciding whether these former officials deserve tickets to the next Miss World contest. This deserves to be a big issue. I wonder if/when it will become so.

Update 8/10/16. Here's a CNN article on GOPers who have declared that they don't support Trump. The list goes on and on. I did eventually get to the end.
Posted by ModeratePoli at 4:28 PM