The Mueller report is finally out. As I wrote earlier, there weren't many surprises. Most of the information had been revealed either in the press or in indictments. As I noted, the MSM has been fairly accurate and good at self-correction, at least from what I've seen and how I've interpreted it. Maybe when I read hyperbolic speculation, I shake my head and move on, not remembering MSM declarations that Trump worked with Russia. My impression was that most reporters and most left-of-center folks were waiting for Mueller to sort it out. Of the regular commenters I knew on Bloomberg, only two were declaring that Trump had conspired. That leaves most of them not expressing that opinion.

The GOPers/conservatives were usually exaggerating what others said, and they were definitely still doing it as the report was released. They accused others of being WRONG, WRONG, WRONG, while failing to notice what others had actually said. Frankly, I don't know how often talking heads on CNN or MSNBC declared that Russia owned Trump. My guess would be that they hedged. I asked my sweetie, who is more left than me. My sweetie expected about 50% chance of a conspiracy where there was enough evidence to indict. So maybe I'm not in touch with those further left without being the looney left.

1. So the first GOP lie is that all of the left prejudged Trump as guilty and are now pretending that they didn't do this. <------- LIE

Another GOP lie is that the MSM hasn't been reporting the facts. In fact, the MSM has been out front on this. I recall the NYT reporting on the Trump Tower meeting. Reporting a bit, waiting for the Trump team to respond, which it did usually with a cover story replete with lies. Then the NYT would release a bit more, and finally it released the emails of Trump Jr. that showed what was going down.

Now I expect a certain amount of spin from the presidency, but a news org should be as honest as it can be (an idealistic hope). However, there is no comparison. The MSM was telling the truth here, and the administration was lying. This was repeated over and over. That's one reason why I wasn't surprised by the Mueller report - because I followed the news, mainly through online MSM sources, and they were very accurate.

Should I move on to some of the crazier lies? Maybe so, and turn the rest of this post into a rant against the lies.

4. The Steele dossier was believed by the left. (No, it was labeled from the very beginning as unverified in screaming letters.)

5. The left took over the CIA, NSA, FBI, State Department, and God knows what else.

6. They all conspired to create this Russian hoax and try to overthrow Trump.

7. The coup was orchestrated by Clinton, Obama and their minions all over government and the MSM.

7.1 Obama didn't do anything about the Russian hacking and interference while it was happening, and instead spied on Trump's campaign.

8. Clinton, Obama, et al are going to jail in a streak of rightful payback.

9. Mueller is part of the deep state and hired Cllinton lackeys to help with the frame job.

10. The Mueller report found there was NO COLLUSION AND NO OBSTRUCTION AND NO EVIDENCE OF WRONGDOING by the Trump campaign.

11. The Dems are going to continue with the hoax because the coup attempt can't stop.

12. The real enemies of America are the Dems. Russians are preferable to them. 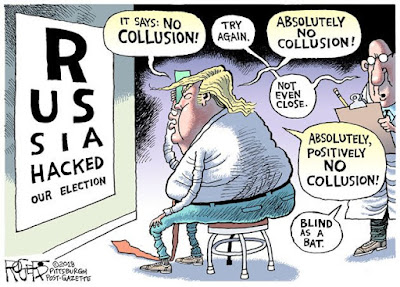 Extras. The FBI warned Trump about contacts with Russians. GOP liars deny this.

Update 4/23/19. I just found an example of GOP lies. Here's an article full of speculation, but it's not labeled as speculation. It's not attributed to unnamed sources (presumably vetted), which news organizations with ethics use. Instead, it's presented as ... um, fact? The big assumption in the article is that the woman Russian lawyer at the Trump Tower meeting was working for FusionGPS to entrap Trump campaign leaders. They also state (wrongly, if I'm not mistaken) that the Trump Tower meeting was used as evidence to secure a FISA warrant. I've looked at the redacted copy of the FISA warrant and didn't see anything about the Trump Tower meeting. I suspect that the author was making it up or repeated unsubstantiated rumors floating around Wingnutlandia.

Update 6/14/19. Trump had an interview with ABC news and he flat out lied about telling McGahn to fire Mueller. Read his lying words.

Posted by ModeratePoli at 2:49 PM