Brain dump on the Mueller report

I wrote how the Mueller report contained no big surprises--most everything had already been reported fairly accurately in the MSM. So what are some of my thoughts?

First, we need a link to the report. However, it's long and very technical with all kinds of dense legal reasoning. It's even harder to read than a Supreme Court decision, so I gave up. Luckily, we have Mueller's summaries, which the Attorney General Bob Barr deflected from. Maybe he didn't want them to be part of a national discussion because they explicitly state:


"... if we had confidence after a thorough investigation of the facts that the President clearly did not commit obstruction of justice, we would so state. Based on the facts ..., we are unable to reach that judgment. ... this report ... does not exonerate him."

That was the conclusion of the second part of the investigation, which focused on Trump's efforts at obstruction.

Really, we shouldn't skip over the first part. Mueller gives a timeline of Russian hacking and disinformation efforts. He also lists the major contacts between the Trump campaign and Russians with government connections. Mueller draws this conclusion:

"Although the investigation established that the Russian government perceived it would benefit from a Trump presidency and worked to secure that outcome, and that the Campaign expected it would benefit electorally from information stolen and released through Russian efforts, the investigation did not establish that members of the Trump Campaign conspired or coordinated with the Russian government in its election interference activities."

The report also mentions "evidence was not sufficient to support criminal charges" and "identified gaps" in their information where witnesses couldn't be questioned or information had been deleted from witnesses' files.

So it looks like Russia reached out on several occasions, the Trump campaign responded, but there wasn't a conspiracy.

However, there was Russian criminal activity. It would be good if Trump strongly agreed with this, didn't waiver or backtrack, and punished the Russians accordingly. If we recall the beginning of Trump's presidency, he did none of those things. Instead, he seemed to favor better relations with a country that had just violated our laws, and our 'sacred election process.' Only the pressure from media reports, public reaction, and Congressional reaction stopped Trump from making nice with the Russians. How sad for the Russians.

Here is my speculation based on the facts I've gleaned. The Russians wanted to help Trump. They also made many attempts to have Trump come to Russia during the campaign. Why? It's odd, and it's not great optics. However, maybe the Russians thought that they could extract promises from Trump since he was known to be malleable.

It didn't play out that way. There wasn't a one-on-one meeting between Trump and Putin until the Helsinki summit in July 2018. However, even that one-on-one meeting didn't quite work out for the Russians. Though they claimed that there were important, ground-breaking agreements, Trump couldn't describe what they were, and he wasn't able to follow up on any specific agreements. So the Russians were left empty-handed. I'll cry them a river over that disappointment.

So the Russians might have hoped for a malleable, friendly stooge in the White House, but they got Trump, a low-information incompetent blowhard who can't follow through for them. Well, ain't that a fly in the ointment. Couldn't have happened to a more deserving bunch. 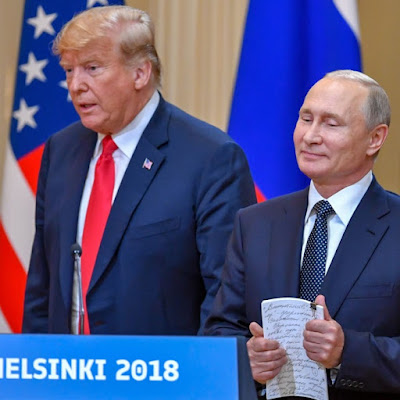 Is Putin still smiling? Does Trump remember what was said? No and No.
Image: nymag.com

Extras. Lots of resources for this post because I like to stay informed, and to review when I'm not sure of the facts. Be sure to start with the Mueller summaries. Several articles about the Russians and what they were trying to do. Fourteen members of Trump's campaign had Russian contacts. There are dangers in the transition period and not enough legal protection.

On the other hand, for people who don't care about thorough research, here's a viewpoint that the investigation was a big waste of money.

A fascinating view of the Mueller report from a cybersecurity expert. For people who say Trump is worse than Nixon, um, no! Read this.

I started wondering where the summaries came from. The links don't say, but here's a site where the headers, footers, and redactions show.

Finally, it's fun to review the flop of the Helsinki summit through several sources.

Update 5/1/19. Mueller wrote to Attorney General Barr complaining about the handling of the summary, and asking him again to release Mueller's own summaries. This happened back at the end of March. The letter leaked today.

A legal expert reads the Mueller report completely, and expertly reads between the lines. The best news for Trump is that he and his campaign had no knowing involvement with the fake news/social media operation. The bad news is that there is a lot of strong evidence for willful obstruction and some failed attempts to work with Russians. It seems when Trump claims "No collusion!" he's in part crossing his fingers for luck. The same legal expert shares his impresssions/notes as he reads the report.

An excellent overview by Bloomberg of the reason for the investigation:

Following Trump’s election, it wasn’t clear that any public institution had the credibility to establish the truth about Russia’s attack. A probe by the House Intelligence Committee imploded in a blaze of partisanship. A Senate inquiry has ambled on for two years, to little result. Into this void, kooks and charlatans across the political spectrum have offered their own feverish theories about “what really happened” — and a lot of otherwise reasonable people have listened to them.

A better approach would have been to appoint an independent panel on the model of the 9/11 Commission, one that could have held open hearings, questioned witnesses, assessed classified information, and published a report establishing the facts.

Instead, this essential task fell — more or less by default — to the special counsel. It was an awkward fit. Mueller’s official assignment was limited: to investigate any crimes that may have been committed in connection with Russia’s interference. But plainly the public was expecting something more: an airing of the evidence, a resolution of the many mysteries surrounding the case, a considered judgment on the actions of the president and his associates, criminal and otherwise.

Despite his limited remit, Mueller was largely able to answer that call. His report was transparent, fair-minded, thorough, and scrupulously evidence-based. Taken on its own, it could have established a baseline set of facts, put the conspiracies to rest, and allowed Congress to take action as needed. It might have enabled the country to move on from a scandal that has at times threatened to overwhelm civic life entirely.

Instead, the whole probe — nearly two years of meticulous investigation, occupying 19 federal prosecutors and some 40 FBI agents — has now been reduced to yet another gross political circus, with everyone entitled to their own versions of reality...

Posted by ModeratePoli at 7:25 PM