The first question to ask on a story about Trump

I figured something out about Trump. He loves to capture the newscycle. Because of this, he frequently says incredible things just to grab headlines. Most of it isn't serious and fades within a day or so. But he still does it and it's very effective in capturing the newscycle for him.

Here is an example. It's a fairly quiet end to a week that started with lots of speculation about the Mueller report and Trump firing his secretary of Homeland Security and other related positions. So what is the top news today?

This is why I think it's a fake story: it's on a buzzy issue. It's a slap in the face of one of his favorite enemies. It's not an acutal policy announcement, but it looks like an action. (It won't be. Announce first, worry about planning later.) If you think about it hard, you realize it's probably not at all likely to happen. He didn't deliver it in a written speech in front of a teleprompter (that indicated more serious announcements).

Sometimes Trump will grab the newscycle just is an outrageous claim or insult. I'll try to remember to add some examples. But it's the same sort of tactic. Be outrageous, capture the newscycle, don't worry because few will remember.

If I was in the news biz, I'd have a weekly column about the crazy stuff Trump had done. I wouldn't give him a headline for something like this. Instead, I'd put it on the weekly list and save it for Saturday or Sunday: 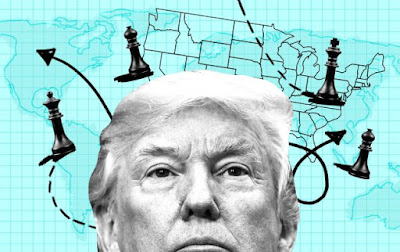 Posted by ModeratePoli at 2:29 PM

Interesting take on the Donald's constant desire to be in the spotlight. Do you think that his constant wackiness would eventually lead to his political downfall leading up to the 2020 election, or would fast-track him to another term in the Whitehouse?

@Mark, I've given up on Trump's downfall due to anything he says. But that doesn't mean he has a fast track either. It's too early for me to get a temperature reading on the country in the 2020 election.