During the summer, the money race seemed to favor Romney, who outraised Obama in June and July. There are also the rich conservative superPACs, like Karl Rove's Crossroads. It looked like Romney would have a big advantage in money for TV ads, just as he had in the primaries. Would Romney be able to glide on all that cash straight into the White House? It was never a sure thing, but it was certainly a concern.

Now, however, Obama has opened up advantages in raising money at the same time as he's pulling ahead slightly in the polls. How did he accomplish this? This ABC article may have the best explanation: the Obama campaign spent a lot of money on TV ads in swing states during both conventions, making sure that his message was heard during those news-saturated weeks. The Romney campaign lagged in TV ad placement.

I wonder whether Romney was keeping his powder dry for a blitz in October. By that time, it may be too late. The Romney campaign and his allied superPAC can dedicate a lot of cash to ads, but the Republican National Committee, which is flush this year, and other rich superPACs may shun Romney and instead devote their resources to more promising races, like Senate seats and control of the Senate.

Perhaps TV saturation wouldn't help anyway. Repetition of the same talking points grates on undecided voters. A more empathetic narrative might work, but Romney hasn't shown that he knows how to frame one. With six weeks left, Romney's hopes depend on increasingly unlikely events--a major Obama fumble, a foreign or domestic crisis that demonstrates an unknown blindness in the Obama administration, a compelling debate performance by Romney that leaves Obama speechless.

I doubt that any of these black swan events will occur. Romney may not be toast yet, but he's in the toaster and really close to those glowing filaments. 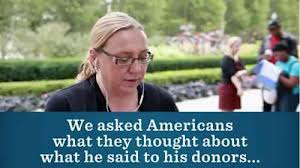 Getting toastier
Image: thenewcivilrightsmovement.com
Posted by ModeratePoli at 11:31 PM

Huh? Romney is winning, at least in the Charlie Sheen sense. All the polls are wrong because they don't sample GOP convention attendees only.

That's why Romney is not raising money. Why should he bother? He's got it in the bag. Even those few Americans that will support Obama will wake up and realize what a disaster the last four years have been, especially when Bush and the Republicans handed him a utopia.

Although, in the end I think Gary Johnson could give Romney a run for his money. He's probably holding back for an anti-Johnson ad blitz in October, assuming Obama simply throws in the towel on reading these biased polls that show him way ahead and viewed favorably by a majority of Americans. He's a smart guy and knows people just tell pollsters this to spare his feelings, on account of his difficult upbringing and all.

@Anon, your comment makes me think that the Mormon view of the afterlife has it right--we each need our own planet so we don't have to share with all the varieties of crazy currently occupying this planet. What's even worse is that your irony isn't even as bad as some real opinions out there. (Excuse me--low tolerance today.)

Don't make me come back there, you two.