I'm no fan of Nancy Pelosi. This is what I've said before:


Her hand in the creation process of the stimulus and reviled health reform bills costs the Democratics a great deal of support ... [H]er egotism keeps her from stepping aside and giving the leadership to someone who could help Democrats rather than further blacken them.

Thinking about her, I realized something ironic. The GOP smears Obama with lies (he's radical, marxist, etc.), but Nancy Pelosi provides them with more than enough completely factual mud that they don't have to invent garbage to throw at her. Look at these headlines:


Republicans are the E. coli club.  (but she has a good point there)

Republican Jews are being exploited.

Pelosi: I could have arrested Karl Rove, but we didn't.

Pass Health Reform so you can find out what's in it.

It's a terrible reflection on the House Dems that she is still their leader. Are the House Dems largely hacks? According to this Politico article, Pelosi draws substantial support from: California Dems, the progressive caucus, and women representatives.

She also has two other big advantages: she knows how to work the liberal money machine, and she's merciless to those who cross her. Fear and/or loyalty keep the House Dems in line and keep Pelosi in her leadership role.

So the House Dems won't depose her, nor is she moving on for the good of the party. This is another sign that Democrats can be the party of stupid. The most successful Democrat in the past 20 years, Bill Clinton, isn't the example Dems follow. Instead, it's Nancy Pelosi.

I hope the Dems don't regain the House, in this election or in any other election until they learn what it takes to become the majority and keep it. In other words, until they win on their merits. The last time they won, it was after 6 years of George Bush and his endless, expensive wars. If that's what it takes for Dems to win, I hope they keep losing. By the way, I feel differently about the Senate and the presidency, since there seem to be fewer hackish senators and candidates for president. 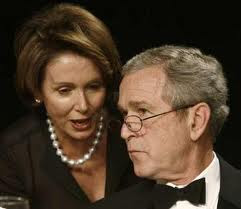 Pelosi with pearls and her biggest sponsor
Image: blogs.southflorida.com
Posted by ModeratePoli at 4:12 PM

Well, as above (or is it below?) hack is the eye of the beholder, this time usually meaning, "any politician who holds a position I strongly dislike and/or whose personal manner and management style I object to."

Having said that it is certainly true that Nancy Pelosi is a strong and controversial figure. Has she been overall a plus or minus for Democrats? I don't know. Pelosi as a person has probably neither helped nor hurt, as few people vote on the basis on who the Speaker is or will be. Pelosi's management style and policies, that is a matter for fierce debate. Whichever side one comes down on in that regard, ultimately it is Obama who is the head of the Democratic Party, and fairly or not (mostly not) it is on Obama's shoulders that the weight of responsibility must fall, even for the Democrats in the House.

I agree that Pelosi is ruthless and capable, far too capable for her enemies and sometimes even for her friends. But it isn't just her ruthless nature that keeps her in power, it is the percieved lack of alternatives. Steny Hoyer is simply too conservative for the Democratic caucus to truly like (although they could support him if they had to) and Clyburn just isn't anybody's idea of a Speaker. Rahm Emmanual might have replaced her, but he chose a different path (and would his style have been any better, after all?) The people of Pelosi's district could bring her down, of course, but as they adore her their is small chance of that.

So, until she steps aside voluntarily (and whether she should or not and whether it would help the Democrats or not is very much a matter of debate), or until a true successor arises, Pelosi can stay as long as she likes. It's just the way the structure of the Democratic Caucus has evolved, at least to all appearances and for the moment.

Oh, another factor that fits into the "lack of alternatives" situation is simply age. Hoyer, even if he were more popular across the Caucus, is only three or four years younger than Pelosi, and being a male his age is more of a factor, to boot. If Pelosi were to step down, I'm sure, as I said above, that the Caucus would be able to accept him, but he would be seen as a caretaker with all the burdens that status brings (although it arguably can bring great opportunities as well, just ask the people who put John XXIII in as a caretaker Pope). So once again we are back, or the Democratic Caucus is back, to finding a more lasting solution.

This, by the way, really highlights the sacrifice Rahm made when he gave up his post as Majority Whip to go work for Obama. He had, arguably, a wider power base in the caucus than Hoyer did, and was more than twenty years younger than either Steny or Pelosi. In other words, he gave up the extremely high probability of being the first Jewish Speaker someday.

Of course, given that he seems to be a popular and successful mayor in Chicago, a Senate campaign or a gubernatorial run probably looms in Rahm's future, and given his ambition, well ... it isn't out of the question that he may have much higher ambitions than the Speaker's chair.

@Anastasios, you're right that the dynamics of the Dem caucus allow Pelosi to stay on virtually unchallenged. That's good for her, but not good the Dems. However, it's of their own making. If they continue to support an old-line liberal as their leader, they will continue to shrink. It's just cause and effect.

But as I said, I don't care if they don't get the House back. I'm fine with them being out of power if they're not interested in curbing their own worst habits.

I rather suspect that if someone like Axelrod or Carville was to be totally honest, they might say something like, "Yeah, we know that the old line liberals cause us problems. The GOP knows the Paulites and the Evangelicals cause them problems, too. But, even though you may not like them, and even though I may not like them, they are an important and active part of our coalition. We can't tell them to go away, we can't tell them to sit down and shut up, and we can't ignore them. Once again, same with the GOP. Much as he probably wants to, Boehner can't tell the Tea Party to shut up and go away. And since they are an important, loyal, and active part of our coalition, we can't lock them out of the leadership. Like them or not, hurt us or not, democracy small "d" does not and cannot work that way -- not in America, anyway. If it could, both we and the GOP would be a whole lot healthier and happier, believe me."

Now, if the American people really want Pelosi gone, or Ryan gone, or whomever gone, the thing to do is to not elect people like that and not support parties that provide that kind of person places to thrive. But the American people show no inclination at all to move solidly in one direction or the other, or to congregate decisively in some spot we could lable the "center." As was remarked yesterday in some opinion piece whose author I have unfortunately forgotten, the most interesting thing about this election, psychologically speaking, is that everyone is decrying the status quo in fierce and sometimes apocalyptic terms while behaving in ways that guarantee the continuation of the status quo. When the American people change their political behavior, the status quo will change. Until then, as usual, the American people have the situation they, which is to say we, richly deserve.