If the Harry Reid is smart (and I think he is), he's probably gotten Patty Murray to stop saying that the Dems are happy to go over the fiscal cliff because it will give them better leverage in 2013. It's not as dumb as the Teapublicans in the House proclaiming that they won't raise the debt ceiling, but it's in the same ballpark, and no senator should be there.

As an elected representative in a party that hopes to do OK in the next election, Murray shouldn't be saying that she's OK with people taking a major hit in their paychecks. You don't want to spite everyone to get leverage in a negotiation. The GOP was doing that last July over the debt ceiling, as it wasn't good for their favorability ratings. Did Murray somehow learn the lesson backwards?

Now I'll be looking for the signs that some of the Dems senators took her to the woodshed and made sure she learned the lesson right this time. 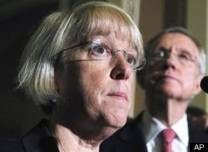 I think there is a difference between the Tea Party faction in the GOP drawing a line against any further debt limit increase and Senator Murray's line in the sand.

For one, the Tea Party group is rump to the GOP Leadership. Sen. Murray is part of her party's leadership as head of the DSCC. This separation of interests can not be overlooked.

Next, the interests of the House Democrats, if they think not increasing the debt limit is worse than helping the GOP avoid blame for "default", may align them with the non TP GOP House members to pass a limit increase. As opposed to the Senate GOP who may not see as much clear upside to compromise with any Senate Dems who would work to pass a deal. Even taking the caricatures of the parties at face value (GOP helping the rich; screwing the poor) doesn't make this a slam dunk. The GOP may want to avoid the increase in the taxes of the well off, but is that enough to offset forcing the poor to pay more and have skin in the game? The income tax cut expiration will hit the lower and middle class more in proportional terms and that is certainly true of the FICA cut too. So, there is policy upside for the GOP in letting everything expire. Even more so if they think Romney will win since he'll then have the extra cash to address issues. While there is no upside for House Democrats in letting a "default" occur, other than hoping the blame falls onto the GOP.

Note that the Dems holding the line on what the GOP demanded in 2011 is not hackery. The GOP wants it both ways, and the Dems are (rightly) using that leverage to pursue their preferred approach, which most of the American public agrees with, by the way.

So if the Dems can force the GOP to drop their requirement for ALL tax cuts being extended or none at all, just to protect the wealthiest from having the tax-increase-time-bomb go off on them, then the Dems should call the bluff. Sure, there might be a little extra withholding in January 2013, which people can adjust for (with, for example, an claiming an extra exemption), or get it back on their return when the time-bomb increase is reversed retroactively for them, so there isn't any REAL pain, just lots of spin and posturing.

Recall that the GOP originally set, then continually reset, the time bomb to explode on everyone. They demand only that ALL cuts be made permanent to shut it off. If this is the only way to reveal and call their bluff so the general public can see it for themselves, then I'm for it.

Two for two disagree that Murray is a hack. Nonetheless, I stand by my position and I'll add more detail.

@truth, I wasn't talking about the debt ceiling and neither was Murray in the link I posted. Also I disagree that the GOP has an upside in letting taxes expire for everyone. I don't think either party has an upside.

@Anon, I agree that holding this line isn't hackery. However, the quotes that Murray gave were:

"If middle-class families start seeing some money coming out of their paychecks next year, are Republicans really going to... fight for new tax cuts for the rich?"

That lets many news outlets say that "Democrats are willing to go over the so-called fiscal cliff." That's not a good message for the Dems. It would be better if they said that they "want to work and negotiate, but a deal that continues 100% of the tax cuts, as the GOP demands, is not responsible."

"Going off the cliff" is a somewhat weak analogy, but it's the one that the media has been using already. Tactically, it's sound if you want taxes to go up on the wealthy against GOP refusal to even consider it. I prefer the "let the tax-increase time-bomb go off on the rich."

MP - how can you say that you were not talking about the debt ceiling?

You wrote: " It's not as dumb as the Teapublicans in the House proclaiming that they won't raise the debt ceiling, but it's in the same ballpark". So you directly compared the two, which is what I doing in saying I think there is a difference.

My point is that because each (the TP and Sen. Murray) are appealing to different constituencies, you can't compare their leverage.

As for the GOP having an upside to letting taxes revert to the pre-2001 rates, I'll point you to the increases that were enacted by Bush I that ended out helping Clinton enormously. Bush took the political hit; Clinton got the revenue to help balance the budget and enact other reforms. If you think, like I do, that new dollars are going to be needed at some point, then getting the use of them without taking the damage benefits the GOP greatly. Even if all they do is then again lower taxes, they gain the political advantage from it.

You're right about an upside of the tax cut expiration, for however inherits the budget. However, the GOP is strenuously resisting seeing it as an upside.

MP - no problem about the passed time. I suffer the same affliction. :)

I am not sure that the entire GOP doesn't see the possibility of new revenue as being positive. They may not say so publicly, but I guarantee the Bush I / Clinton comparison has been made.

In full disclosure, I worked on Capital Hill for almost ten years for a moderate GOP House member and for a southern GOP Senator. I started as an intern and left as the most senior policy person in the office.