You know it's not good when a campaign has to fall back on a blanket defense, such as "that's unAmerican" or the current Romney defense "he's lying about my [Bain] record."

Come on, we all know that outraged claims of ‘lies’ are just the pot calling the kettle black. I’m not going to vote for one candidate over the other because I think one lies and the other doesn’t. I’m not 7 years old. Most adults and all presidential candidates lie to a certain extent. We can't precisely measure the extent of the lying, so it has to be a whopper to move the needle. Is there anyone who doesn't recognize that this is the reality of campaigning? If so, cast the first stone.

When it comes to pointing fingers at who is the bigger outsourcer, Romney is going to lose. He certainly isn’t the pioneer of outsourcing, but Bain, like lots of companies, did a great deal of it.

It sucks to lose a news meme. The GOP has lost this cycle, and will need and want to come up with a winning line soon. I wonder what it will be… 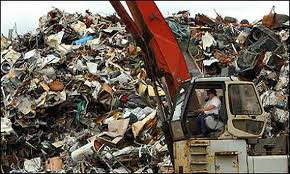 Maybe it's all recycled from previous campaigns...

Update 7/15/12. I just remembered a relevant point. Obama kept a lot of jobs in the US with the auto bailout. Yep, the one Romney was against. This line of campaigning is only going to get worse for Mitt.

Posted by ModeratePoli at 9:52 PM

Before Romney gave his spate of "interviews" to the media about this, I could tell that his camp was very worried about how it would play. One of his spokespeople was talking really fast and posturing hard and strong on the issue, but not saying anything substantive at all. That was a tell.

The next day, Romney himself tried to defuse it by giving the same non-answer answer over and over again looking completely confident in his rehearsed testimony, like a tobacco company executive who convinced himself (conveniently) of a basis untruth.

This is an example of chickens coming home to roost. Romney wanted it -- demanded it, in fact -- every which way with regards to Bain. He was the leader, the job creator, the innovator, and the expert on the economy from his time at Bain. But he wasn't to blame for any failures, double-dealing, negative consequences, etc. for that same enterprise. And he was involved when he wanted to be, and washed his hands from it when that suited him -- in his narrative.

The truth is he helped to create and execute the playbook in the 1990s, and whether he left day-to-day to others (which it seems he did in 1999) or not, he was still quite interested in the Bain strategy because he was making money from it. Exactly how much he won't say, and refuses to let his tax returns tell the whole story.

So now he's getting what he deserves from trying to play it coy and getting away with in during the GOP primaries. Obama and his campaign have only just started. They can attack Romney -- legitimately -- on Bain using his playbook whether he was in charge or not. They can use the same argument to blunt GOP attacks on the deficit: it's Bush-era wars and tax policies that couldn't be touched during the Bush-induced recession that account for most of the debt and deficit. (This has the advantage of being true.)

They can attack Romney for being just a figurehead at Bain -- a son of privilege with lots of connections who got paid for doing nothing except selling an image -- a lot like how he's trying to win the presidency. All of this is very bad for Romney, as he has no answer to why he should be POTUS. It's clear that it's always just been a prize to him, just as Bain was. Mitt Romney is a user, and people without a pre-determined view of politics are starting to see that.

@Anon, Agree, and kudos for writing it so well. "like a tobacco company executive" is brilliant.

I used to think Romney was in this race to lead the country to what he considered a better, more pragmatic path. Now I'm questioning that a lot, because he seems to have sold his soul, or maybe he never had one.

However, I'm not going to write off Romney's chances of winning. A presidential campaign has tons of moving parts, and a lot can change or go horribly wrong between now and November.