Injustice from the justices

Phew. I think this will be my last post on the Obamacare ruling. I've worked through the vast majority of my ideas. There were a lot:
This post is about the reaction from the close colleagues of Chief Justice Roberts.


Departure from normal standards
The Supreme Court is an insular institution. The justices don't have the electoral pressures that require most politicians to communicate with the public and explain their actions. Also, leaks of insider information from the Court are rare. So this case is a major exception, which adds another layer of oddity to this decision.


The leak was made to Jan Crawford, a CBS reporter who's scored important interviews with several justices. Her first article told about how Roberts initially agreed with the four conservative justices to strike down the health insurance mandate, but during the course of writing the opinion he found grounds to uphold it, thus siding with the liberal justices.


Is this inside report credible? Yes.
I don't automatically credit this article as factual. However, some of the reporting is backed up by information in the Court's 193-page ruling. Ms Crawford writes:


And so the conservatives handed him their own message which, as one justice put it, essentially translated into, "You're on your own." The conservatives refused to join any aspect of his opinion, including sections with which they agreed...

This is absolutely borne out by the ruling. Roberts writes how the mandate cannot be upheld under the Commerce Clause. The four conservative justices agree, but express that opinion separately instead of in a concurrence with Roberts.

Determining the Viewpoint of the Leak
Since the report passes at least one test of credibility, I'm inclined to believe that it's an accurate report. However, it's a report that comes from a particular viewpoint. Considering that it gives details about the interaction of the conservative justices among themselves and with Chief Justice Roberts, it evidently came from a conservative justice or sources close to conservative justices.

The article contains speculation (whose we don't know) that Roberts was influenced by outside pressures, not only considerations of law and constitutionality:

Over the next six weeks, as Roberts began to craft the decision striking down the mandate, the external pressure began to grow. Roberts almost certainly was aware of it... Some of the conservatives, such as Justice Clarence Thomas, deliberately avoid news articles on the court when issues are pending... But Roberts pays attention to media coverage. As chief justice, he is keenly aware of his leadership role on the court, and he also is sensitive to how the court is perceived by the public.


Does this information come from John Roberts himself? I doubt it. It sounds like someone's analysis of his actions and motives, not his own self-explanation. The article is filled with observations from the viewpoint of one or more conservative justices:

At least one conservative justice tried to get him to explain it, but was unsatisfied with the response, according to a source with knowledge of the conversation.

Note the view here is from one of the conservative justices. It's not Roberts' viewpoint of the incident, or that of a liberal justice, nor it is likely to be the report of an unbiased fly-on-the-wall. One last example:

"He was relentless," one source said of Kennedy's efforts. "He was very engaged in this." ...Roberts then engaged in his own lobbying effort - trying to persuade at least Justice Kennedy to join his decision so the Court would appear more united in the case. There was a fair amount of give-and-take with Kennedy and other justices, the sources said. One justice, a source said, described it as "arm-twisting."

Anger of the Right(eous)
In another, shorter article, Ms. Crawford writes about the anger of the conservative justices:

If Roberts had been with the liberals from the beginning, sources tell me that would have been one thing; but switching his position - and relatively late in the process - infuriated the conservatives. ...Of course it's unclear why he switched. He may have been focused solely on the law. But that is not what some of his colleagues believe.

The picture that emerges is one of intense anger clothed in restraint. Restraint is certainly to be expected from the highest judges in the country. However, the level of anger is surprising. Why can't the conservative justices accept this as a good faith difference of opinion?

The level of their anger is indicated by their refusal to formally concur with Roberts' opinion on the limits of the Commerce Clause. He went against their view, so he received the force of their righteous anger: if you're one of us, you better stay one of us. No allowance for difference of opinion.

The next court term could be mighty interesting if these justices continue behaving this way. Let's hope they cool off during the summer, because they are stuck together in these lifetime appointments. Beyond that, I personally hope to see continued independence from Roberts. I'm rooting for anyone who'll break out of the armed-camp mentality of the politics in this country. 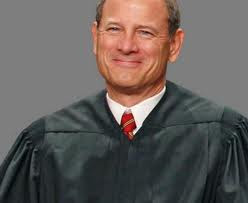 Posted by ModeratePoli at 1:01 PM