Short: When you aren't the target audience

Bernstein had a great, timely reminder that the general public is not always the target audience for all parts of the campaign. He writes about the rumors that the Romney campaign is going to start 'vetting' Obama. By vetting, they mean it the way Breitbart meant it, which is digging up any past action or association that looks at all radical or socialist. "Palling around with terrorists" will make a resurgence.

However, this part of the campaign is not for general consumption, but a special mooshy dessert for the GOP loyalists who can't get enough of Obama as foreign agent provocateur. It'll run mostly on Fox and the conservative blogosphere, but not on the general airwaves in the swing states. At least, that's what I'm guessing. I don't live in a swing state, so I can't find out easily by turning on my TV anytime between Labor Day and Election Day. Ah, spared the excitement! 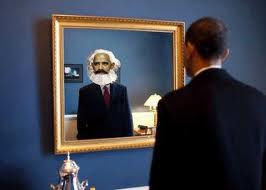 None of the character or association attacks on Obama are likely to work among my independent neighbors (particularly suburban women) who voted for Obama in 2008. It's a tough sell to convince them they were duped by Obama. Nobody likes to think that, and the evidence just isn't there. So naturally we don't see them on the airwaves. But they do hear about them from their right-wing friends and co-workers, who they will humor but quietly just vote with the Dems up-ballot, and stick with GOP down-ballot.

Economic attacks can work for Romney if they don't push it too far. They are disappointed with Obama, but not ready to blame him alone. Since they like him more, they are likely to give him the benefit of the doubt, particularly since things aren't that bad in suburban swing areas.

My analysis is that ginning up the base at this point is a sign of indecision on the part of the campaign. They can't rationally believe that red meat, if served up hot loud and often will convince swing voters. In the end, if comes off as an insult if they voted for OBama in 2008. And Romney has to convince a lot of Obama '08 voters to reject their votes and admit a mistake in 2012. Not an easy task.

@Anon, please report back if you start seeing this type of commercial in your area.

I don't understand what you mean that ginning up the base "is a sign or indecision on the part of the campaign." Do you mean that they don't have a plan, so it's an easy default action?

Right. They aren't making up any ground with their target audience with their arguments, so they are trying to solidify the support of those that are likely to vote against the President anyway.

The plan is to hope the economy stalls so they can reinstate their primary argument to fire that strange choice of Obama and put a real business guy in charge. It's a tough argument unless things are worse.