Everyone was thrown for a loop last Thursday when Chief Justice John Roberts was the swing vote in the 5-4 decision upholding most of Obamacare, and changing just the penalty if a state opts out of expanding Medicaid.

Since then, John Roberts has been massively reviled by conservatives, who immediately started calling him a RINO, traitor, wimp, etc. However, I noticed that Roberts worked with the justices who were willing to show flexibility. The four dissenters (Scalia, Thomas, Alito, and Stevens) wanted to throw out the entire law--every single part. It seems that Roberts saw parts of it that were within constitutional bounds and he wanted to allow those parts to continue, which is reasonable because the law was passed by duly elected officials.

Since the conservatives weren't willing to let any of the law survive, Roberts was driven into the arms of the liberals, who didn't take an all-or-nothing stand. They didn't force Roberts to except the mandate as within the rights of Congress under the Commerce Clause. Instead, they joined in allowing it on taxing authority. This argument had been made in court, so it wasn't an invention of the justices. The liberal justices also gave in to severing the Medicaid expansion from the penalty for not expanding (loss of all Medicaid money).

This is a rare win for flexibility, but a terrific one. Conservatives and the GOP should take a lesson. 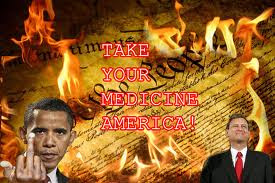 
Extras: Most cited insider article; a bit long but fascinating throughout. Many legal opinions from a law site. The text (193 pages) of the ruling.
Posted by ModeratePoli at 5:56 PM

I agree. Roberts didn't want to shoot down the whole thing, so came up with a reason it was Constitutional -- one of many possible reasons -- and ran with it.

I'd like to point out that his dissertation on why Congress' taxing authority made it Constitutional when other clauses did not does not constitute law, however. While the GOP jumps on Roberts calling the penalty a form of a tax (correct) and that what Congress decides to call it is irrelevant for Constitutional analysis (also correct), his declaration that is it a form of a tax under Congress' taxing power is simply dicta. The holding is that the law is Constitutional.

Future courts are unlikely to adopt the reasoning that any mandate placed on the people can't fall under the Commerce clause or the Reasonable and Proper clause, and ONLY the taxing pokwers clause since that isn't part of the holding. He never got 5 votes for that. So it's just his opinion. The other 4 concurrences agreed that it could be a basis for the law to be declared Constitutional.

So it's a political football but the analysis and argument of Romney and the GOP that it's a tax because Roberts says it's a tax is not correct. It's a tax because it's a tax and could always be considered a tax, albeit a conditional one. Mandate/tax/penalty/fee is irrelevant in assessing such a provision of law from Congress. That's what Roberts and the 4 other concurring justices held.

I agree that this isn't the final word on the Commerce Clause, because it never is.

BTW, I'd be a terrible constitutional law nerd because I'm not 100% into the "rule of law" orthodoxy. I also care a lot about outcomes. I'm still hopeful that ACA will have a net positive outcome for Americans.