Classify this under unsurprising research: NPR (tax-supported liberal radio to some, the most detailed radio news to others) aired a story about how the public often prefers lies in support of their political opinions to the truth, at least from political candidates.

No, tell me it's not so! ...Except that anyone who examines media bias already knows this. However, here's an interesting counter opinion. 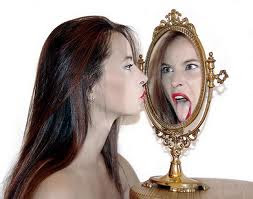 Give me what I want, not what I say I want.
Image: flickr.com
Posted by ModeratePoli at 6:04 PM