More about Fast and Furious than you ever heard from Congress

I've been slightly interested in the Fast and Furious newstory, but not very much.  Here's my quick assessment: it looked like an ill-conceived program conducted at a low level of government, but is being exploited  to smear higher-level officials. It might be more interesting as a sign of the divide in news reporting, where conservative media are running the story 10 times as much as MSM.

Now, based on a tip from a plain blog comment, I started reading some of the details about the people involved in the operation. It's interesting to read about the gun situation in Arizona, the difficulty in getting charges against gun runners, and infighting in the ATF office that made this blow up in the national media.

I'm not going to try to meticulously sort truth from spin in these articles, because my quick assessment seems accurate in the light of additional research. If there is a scandal here, it's how easy it is to purchase guns and hand them over to unsavory people. That seems to be the root of the problem and the reason for the ATF operations, but I'm not going to start a vain campaign for tighter gun control.

However, I will point out when the facts are skewed. Truth is something I'll fight for anytime. 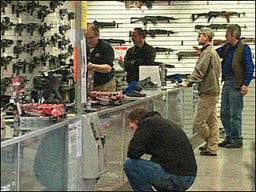 Posted by ModeratePoli at 5:29 PM