The obscure motives of John Roberts

Conservatives can't understand why Roberts deserted them when deciding that the Obamacare mandate was constitutional. Only a few take his opinion at face value as "a fully plausible case." Here's a list of the some of the reasons conservatives suggest for Roberts' betrayal:

Critiques of (some of) the theories

#2. The belief that he was intimidated by the liberal media is laughable. There are enough conservatives around so he wouldn't feel outnumbered. He's shown no signs before of being intimidated before, even on a big case like Citizens United. No, this speculation smacks of "blame the media" overreach. The idea that a lifetime appointee to the highest court in the country will be meek and wishy-washy, and base a ruling on gabbing bloggers, reporters, and anchors is crazy. The justice may be beholden to the president who nominated him or a particularly strong senate supporter, but to the media in our fragmented news age?  Come on.

#4. People who generally like John Roberts want to ascribe a noble motive, and the favorite choice is that  he wanted to salvage the reputation of the court by not striking down this highly political program. The supporters of this theory are at least moderate in their criticism, instead of being in the "string him up" camp. They are also realistic in acknowledging the specter of Bush v. Gore.

#6. This a black helicopters/jackboots/demonic-Democratic party conspiracy theory that will be impossible to disprove even when there's absolutely no evidence. So it must be true.

#7. The 'jinx' theory is more a superstition than a logical theory. However, it's a particular favorite of mine. It seems odd that only the good ones (conservatives) become possessed, never the bad ones being possessed by good spirits.  However, back in reality, there's a different explanation: Souter was always moderate; O'Connor was always a woman, and women will see some things differently; Kennedy reportedly has a libertarian streak; Earl Warren--I don't know.

All the theories ignore the opinion itself, which lays out the logical reasons for his choices, including precedents on which he relied. As I've said before, these positions are logical, both pro and con. It's not as though one is clearly logical and the other illogical. Instead, it's a matter of how much value you put on this argument versus that one, this outcome vs. that one.

I offered my own theory--that Roberts wanted to salvage some of the Obamacare law, and only the liberals would then talk with him. Who knows, and would they tell us? Probably not, but I'm used to unsolved mysteries and truth that remains hidden. Speculation is OK as long as it's treated as such. I wonder in six months whether there will be any buzz at all about this issue. I hope so, because I believe the Supreme Court is too political, and I'd like to see the dynamic change even more. Oops, now I've really set myself up for disappointment... again. It's the bane of the optimist. 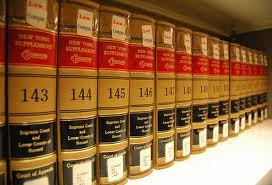 They forgot to look here for the reasons.
Image:columbianacountylawlibrary.com


PS. I haven't exhausted my thoughts on the ACA ruling yet. I hope others share my fascination with this twist in American politics and jurisprudence.
Posted by ModeratePoli at 2:51 PM