The GOP has regretted the defense cuts they agreed to last August almost as soon as the ink was dry. Now  few Democrats are getting into it. Tom Harkin is cherry-picking cuts to vaccine programs to show how bad the sequester is. This commenter expressed some of my sentiment:

The comments were generally quite pro-sequester. That means the portion of the public that's paying attention is more realistic and pragmatic than the elected officials.

I've come to think that the sequester was the best Congressional action of 2011. They finally began to face the huge task of cutting the deficit. They also accepted, if only for a microsecond, that the pain was going to be spread broadly instead of being shoved onto the "other side."

I'm going to make a prediction. After Obama details the cuts, as the House and Senate are requiring him to do, there will be: 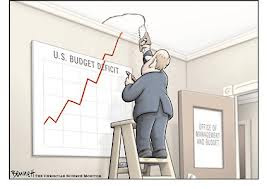 Not a workable solution
Image: jlnavarro.blogspot.com
Posted by ModeratePoli at 2:42 PM