Short: Latinos' message to the Dems

The GOP tried to make an appeal to Latino voters at their convention, but it was definitively too little to make up for the years of immigrant-bashing and the months of one-upmanship on how to protect the border (the electrified fence, moat, and alligators).

That doesn't mean that the Democrats have Latino votes sewn up. Latinos vote at lower rates than other groups, and they are more socially conservative than other Dem-leaning groups. However, the Democrats have a lot of positions that Latinos strongly support, like allowing children who came into the country illegally to stay legally, work, and get educated. There's also support for college education such as scholarship aid. After reading a list of Democratic positions and programs that benefit Latinos, it's hard to think that many will vote Republican. Maybe not, but Jorge Ramos doesn't want Dems to take Latinos for granted. That should be a no-brainer for any politician--you don't want to ignore demographics. 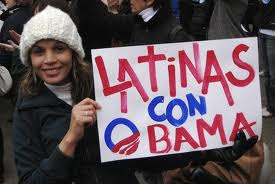 
Extras: Latinos could turn Texas Democratic by 2030, if (big if) current trends hold. My own thought--could Latinos make the Democratic party more centrist? I'm always hoping for that, so of course they can.
Posted by ModeratePoli at 3:56 PM

Could Latinos turn the Democrats more Centrist? Hmmm. I guess it depends on what you mean by that, centrist being in the eye of the beholder (almost always meaning whatever it is that the person speaking happens to like). So, are there things about Latinos and there positions that you like, and that you would like the Democrats to move toward? If so, what are they? That is probably more to the point than trying to parse out who, or what, is centrist. Or moderate, for that matter, another term that almost always simply means "whatever I like."

The other question is to what extent demographic groups (or any other kind of group) changes a party, and to what extent party affiliation changes a group. I suspect, personally, that it is very much a two-way street, with one lane or the other being more prominent in given circumstances. So, if Latinos really do give up on the Republican Party, as say African-Americans did in the post-Lyndon Johnson era, then it is a live possibility that Latinos will conform to Democrats in their political behavior, rather than Democrats conforming to Latinos.

One can make at least a plausible argument that the latter is the story of the African-American vote. After all, African-Americans are, as a group, even more socially conservative than Latinos, but they are happy to vote for, to give an example, pro-choice politicians if it means advancing the greater cause of the coalition they favor.