Short: Latinos' message to the GOP

Latinos will have a large presence at the podium of the GOP convention. I doubt if that at all reflects the facts on the ground. It seems to me that the GOP base has been bashing Latinos for at least the last 4 years, blaming them for crime, crowded hospitals and schools, anchor babies, high social spending, and hordes of other ills. Now that the GOP needs more votes, it's time to forgive and forget.

I don't think that will work. People don't have such short memories. Jorge Ramos, news anchor for the Spanish channel Univision, wrote an interesting letter berating the GOP. (He promises a letter to the Dems next week. Stay tuned.)

If the GOP thinks it can be the party of innuendo, dog-whistles to nativists, and collapsing social services while protecting the rich with bailouts and tax preferences, and then expect any minority support, it should think again. Try starting your outreach by having your leaders stand up to the ugly, bigoted elements in your party. Then put the middle class before the rich. At that point, you have a chance to gain support from the family-oriented, job-oriented Latinos in this country. But first things first. 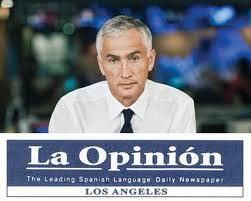 Extras: Romney needs 61% of the white vote. Ick. Has the electorate been so sliced and diced that campaign analysts can be this precise? Romney ran different campaign messages in English vs. Spanish.

Posted by ModeratePoli at 1:24 PM