Report from the GOP convention

[Warning: This post doesn't discuss the last day of the convention when Clint Eastwood rambled and yelled at a chair. For a serious discussion of that day, um, good luck. For funny twitter reactions, look here and here. If anyone wants to read about the other days, I've left this post up. But, really, why is anyone going to want to know about any other day?]

The first day of the GOP convention sounded pretty dismal. Ann Romney tried to make Mitt lovable, but left people still wondering if there anything lovable about him. Maybe you have to be a Mormon to understand. Christie talked about "hard truth" and left it at that, no actually hard truths, just the words. Well, no matter. The convention is a pep rally, not the strategy session where you assess your strengths and weaknesses. [Disclosure: That's my impression of Tuesday based on written reports. I didn't listen.]


Pawlenty, Huckabee
Tonight, I started listening during a drive. Pawlenty wasn't have bad except for not having a memorable moment. Huckabee insults Debbie Wasserman Schulz and then says "Bless her heart." He let the evangelicals know that it was OK to vote for Romney, but he stayed away from the current hot-button issue of abortion and let people know that contraception is OK too.

The "We don't hate" Women
Condi Rice had a good speech, and a great remembrance of growing up under Jim Crow, but her parents made her feel that she could grow up to be president. There was thunderous applause, making me wish she could have been the VP nominee. But she couldn't because she's pro-choice. I also remember that she was a yes-man to Bush and Cheney, and one good speech doesn't undo a hundredth of those years.


Paul Ryan
Susana Martinez had a good speech about boot straps. It sounded like her first use of Spanish was booed. I'll have to find out. [Can't confirm.] Paul Ryan started off slow and awkward, but finished strong. He said some phrases that are going to boomerang on him. He said that any measure of Obama has to take into account the condition of the economy. But how about taking into account the obstruction of the Republicans? A commentator pointed out that Ryan said Obama threw away the Simpson-Bowles plan. That omits Ryan's own role, which was voting against recommendations along with the rest of the House GOP commission members. Ryan played a huge role in torpedoing Simpson-Bowles before it even got to Obama. That's going to be an issue he can't duck in the next two months.

The GOP convention sounds middle-American. It hasn't been overly angry, or stern, and has avoided culture wars and blaming the poor. I wonder if the Dems can remain as positive as the Republicans were tonight. (Sure they can, sure.)


The Scary Future
Of course, the weak link, Romney himself, is coming up tomorrow. We'll see if he ruins the tone, weakens it, or actually enhances it. About Romney, I'm no longer an optimist. 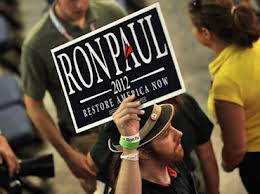 Not the only blip in the pep rally?
Image: rt.com
Posted by ModeratePoli at 12:33 AM