This reflection was inspired by the Lubbock County judge and his concerns about Obama sending in the UN troops. While watching him, I wondered if he was for real. Some people in America actually believe talk like this, that Obama is a hair's breadth from being a dictator, and that civil war will erupt if he's reelected. These are true tin-hat paranoids. But many more (I'm guessing) say these kinds of things without really believing them. Unfortunately, it's hard to identify the true crazies from the more numerous people in America who are simply spouting.

The spouters do so because it's cathartic to express their hate of Obama and America's liberals. Expression is such a cathartic experience because we are usually constrained by manners, religion, social relationships, risk aversion, etc. from saying a hell of a lot of the thoughts that stream through our heads. Inside everyone of us is a person who would love to spout out everything if we could do it with impunity.

And we actually see people who get to do this: Ann Coulter, Rush Limbaugh, Keith Olbermann, and innumerable screaming heads on cable news. Who doesn't want to be able to do some of that?

There is a drawback to all this spouting. Well, many drawbacks, but I'll focus on two of them. There's a kind of one-upmanship that can occur that is most often seen in "Yo Mama" insults or southern insult contests-- "I'll beat you so bad you'll have to ..." So in all the red parts of the country, people have been talking about how awful it will be if Obama is reelected, and the predictions have been ramped up many times. It's no wonder that there's an elected official in Texas who says such things.

Another problem is that some people aren't in on the joke, so to speak, and don't realize the level of exaggeration. They take it as gospel. But we can't tell those who are serious from those who know it's a bunch of over-the-top claptrap.

When Obama wins (more likely when than if), we have to hope that there are a lot of people in these camps who know how to de-escalate. The example of 2009 doesn't give me much hope, but I'm a silly optimist anyway. I'm the last one you want to invite to your gloom-and-doom survivalist compound, which I guess accounts for the lack of invitations I've received. I guess they weren't lost in the mail. 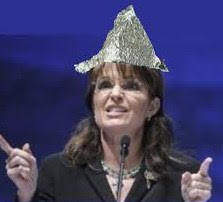 Does she or doesn't she?
Image: indiedesign.typepad.com