Oh my God have those news cycles been dominated by gaffes. We were talking about Medicare funding ... and successfully avoiding talking about the Medicare cuts "our side" voted for... then we were saved - SAVED - by Joe Biden and his "chains" remark. Then we had more fun and a great biology lesson from Todd Akin. Will we ever get back to some real issues? OF COURSE NOT.

The easiest way to derail a news meme that's not going your way is to find something egregious said by the other side. There are probably tens of thousands of politicians giving statements, holding fundraisers, and going into interviews without gags in place. Someone is going to say something. Then we have twitter and the internet and so many willing campaign operatives and media critters that no gaffe needs to go unnoticed. I predict that this is the way the rest of the campaign will go. Maybe there will be an undercurrent of real issues, but it most of the coverage will be of one gaffe after another.

Both sides will play this gaffe game, but so far the Dems have been the winners. I bet the GOP is working just as hard, but they have one or two major handicaps.

The first handicap, which I'm certain of, is that most of the mainstream media tilts a bit left. They're more disposed to report gaffes than embarrass Repubs and less disposed to report gaffes that embarrass Dems. The right can scream all they want about media bias, but we've heard that before, and screaming it louder isn't going to help them. Their own media is even more blatant in its bias, which can't help them when they try to get sympathy, nor if they try to counteract the leftist bias with their own gaffe reporting. The conservative media just hasn't built up any credibility, and that's going to hurt them now.

The other handicap I'm less certain of. Both sides have their whackos, but it's possible that the right has more of them. There's been more upheaval in the GOP, what with the Tea Party and Libertarian factions growing. Another contributor to the whacko count was the GOP having fewer incumbent senators and a lot of challengers not acclimated to greater media scrutiny. This may be too much of a generalization based on Akin, Angle, and O'Donnell.

These handicaps mean that the GOP will probably lose the gaffe race unless there are some stunners by Dem candidates. However, it's hard to figure out which gaffe will rise to the top. The same day Todd Akin uttered his gaffe, an election official in Ohio wrote "I guess I really actually feel we shouldn’t contort the voting process to accommodate the urban -- read African-American -- voter-turnout machine." He wanted to make sure the early voting in Ohio didn't include Sunday. No convenient weekend voting that might help those undesirables. That sounds pretty major to me.

This demonstrates another odd thing about gaffes: individuals don't decide how bad a gaffe is--it seems to be an accumulation of responses more like a herd or a hive-mind. I have a hard time identifying the characteristics of a winning gaffe versus one that isn't going to make a dent. (Example - Cain's 9-9-9 plan and how the numbers didn't add up. Yawn - nobody but me cared.)

Perhaps people will tire of campaign coverage by gaffe. If so, what will replace them? I doubt if wonky position papers will attract general attention. I can hope that punchy, clear policy statements and critiques might work, but the hive-mind probably disagrees with me on that. I'll just have to wait and see. Sigh. 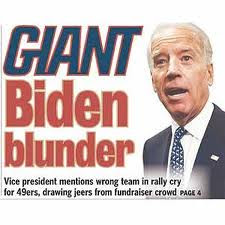 
Just to clarify: This is not a joke. I really believe that issues will be largely undermined, and the flashiest, most memorable media coverage will be about gaffes. I would mourn the lost chance for a good campaign, but the the outlook hasn't been promising for a while. This isn't a death so much as another nail in the coffin.

More about gaffes.  Bernstein on gaffes.
Posted by ModeratePoli at 2:35 PM