I'm impaired when it comes to finding this or that statement as "outrageous" or "desperate" or "despicable." I'm surprised anyone who has observed politics for the last 4 or 12 or 16 years can find anything that registers as surprisingly outrageous or desperate. The political discourse in this country has rarely been anything but nasty in those times.

So, how does Romney still have a sensitive enough antenna to pick up outrageous and desperate emanations from the Obama camp? I would think his antenna would be de-sensitized by his own ugly, nasty, low, and insulting campaign.

This has been a theme for my comments on other blogs for a few weeks now. Here are my best comments. From plain blog:


My outrage-o-meter stopped working long ago, but it's fascinating how outraged Repubs are considering that Glenn Beck was spinning conspiracy theories on the thinnest grounds, unsourced questions (ha) or allegations are de rigeur for Fox News, and Michelle Bachmann got to debate with all the other GOP candidates despite her history. The GOP may SAY they're outraged at the tactic, but they're really just outraged that a high-placed Democrat is using it against them.

How about this for a metaphor--no unilateral disarmament. I'm a former lib who stopped supporting that misguided proposal vs. the Soviets about 1981. I don't support it for the Dems now either, and for the same reasons. There's no reason for a good person to enter a conflict with a self-imposed handicap.


The Republicans forfeited their right to call a campaign outrageous, low, ugly, or divisive four years ago, when their VP candidate was calling Obama a terrorist, when Bachmann was calling for investigations of unAmerican members of the House, when countless Republicans said Obama was an illegitimate president because he wasn't born in the US. That kind of campaigning was outrageous, low, ugly, and divisive, and the GOP has not stopped doing it for 4 YEARS!!! So don't whine to me about how nasty anyone's campaign is. You Republicans have defined nasty for 4 years, so deal with it. 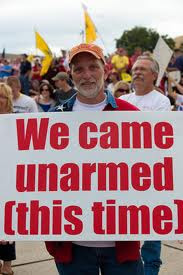