Hail to the sequester

I'm a fan of the sequester for a simple reason: it cuts spending. Spending has to be cut. We are running a huge deficit that isn't going to shrink any time soon with our projected economic growth being so low. So if we are to avoid mounting up even huger piles of debt, we need to cut spending, raise taxes, and probably both.

I prefer that most of the deficit reduction come from spending cuts. We spend so much on government functions mostly because we aren't taxed for the full expense. If we had to pay the full amount, we would quickly decide to do without some of those government functions.

That is what the sequester does--it trims government. We should applaud the sequester, not bash it. Specifically, Republicans should support it. They're the ones who most favor cutting spending. Well, this is what spending cuts LOOK LIKE. Did the GOP, or the rest of us, think it was something else?

Of course, the GOP might have had the delusion that we would only cut programs they don't like, but even then, the GOP wasn't being too specific. How deep would they make cuts to food stamps, children's health, EPA, veterans' health, college aid? I haven't seen a specific proposals from a mainstream Republican--Paul Ryan's proposal was mostly smoke and mirrors. Romney's proposal: a vague leave-it-to-the-next-Congress.

So this sequester panic, I don't understand it except as a political fearmongering. The sequester is a cut. Embrace it because it's what we need to do. This one is just the beginning. 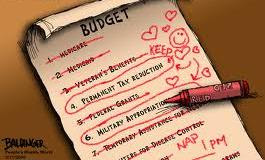 Did they think this is what it would be?
Image: dbaldinger.com

Posted by ModeratePoli at 8:48 PM

MP - I agree with your embrace of the sequester. But I'll point out that they aren't cuts at all. Yes, even the draconian, can't be tolerated, won't someone think of the children (and DoD contractors) sequester only slows the rate of growth in the increase. I know it is semantic, but it is important.

You can read more here: http://mercatus.org/publication/update-federal-spending-without-sequester-cuts-fy2012-2021 and see the paltry difference that the sequester makes on the slope of spending growth.

Thanks for the link. Yes, as I say, this is just the beginning of the cuts we need. But really, we don't need cuts as much as we need discipline to vastly slow the rate of spending increase.

There was one commenter on the Atlantic site, steveinch, who made this point multiple times before I finally caught on. If we could just roll back some of the Obama spending increase and then stay at that level, we wouldn't even need to cut.

I know some of the problems with that. 1)We don't get rid of ineffective spending if we just freeze it. 2) We have programs like Medicare and SS that just grow with the demographics.

Truth brings out a very important point. I agree that the overall trend is upward. Let me add a couple of wrinkles, however. First of all, Defense planners operate in rolling timeframes that may encompass anywhere from five to one hundred years (I'm not joking about those numbers, I have seen one hundred year planning briefings). The cost of various initiatives, for instance the acquisition of new fighter aircraft, is distributed by various paradigms across the timeline of an initiative and, once the program has been approved, is considered to be the planning baseline. Thus when you hear a defense analyst talk about cuts, they are actually talking about cuts that carry particular programs below the baseline, that is the projected spending, and thus are real cuts in the language of the defense world. Indeed they are often real cuts in the language anyone would use, since the money is often spent today and then "costed" against future years of a given program. So if you say a particular program is being cut from a 10% increase to a 5% increase the real effect of that is to take the program below the planning baseline, and to place it in the hole immediately as much of the money already spent is accounted for against future funds that are about to be reduced.

To make matters even more complicated, there are four main channels of funding for defense projects. The ordinary budget, which includes contracting funds, is what most people think of when they think of "cuts." However personnel are accounted for using another budgeting system which does not use dollars but personnel slots, which relate to dollars in complicated and arcane formulas which are constantly manipulated by personnel and budget wizards. The two categories which budget cuts do not usually reach are the Overseas Contingency Operations budget, that is the budget actually used for the fighting of wars, and the Black Budget for highly classified projects. Both of these budgets can be and regularly are used to "shore up" the normal and personnel budgets, as they offer streamlined, relatively unaccountable, and/or politically untouchable expenditures.

In short, in the defense world, spending is not spending, increases are not increases, cuts are much worse or much milder than they appear, and people are often honest and quite perfidious. Now, when you get into the intel world, the situation becomes complicated.