One of the most reliable and worst features of the political conventions is the speech by a disaffected member of the other party. This year the GOP has Artur Davis. He was defeated in the Democratic primary for Alabama governor. The Dems have Charlie Crist, who was defeated in the Republican primary for a Florida senate seat. I don't really care what either says, because sour grapes is probably the core reason for the defections. Why should I listen to whatever they've wrapped around those grapes?

After further consideration, I actually don't care for any convention speeches. They're usually pander-fests, with red meat rhetoric to juice up the stalwarts. Maybe the only fun would be trying to guess who'll be the turncoat in four years time. 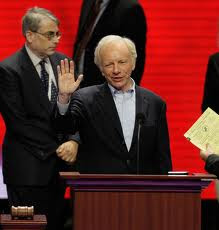 I volunteer.
Image: sun-sentinel.com
Posted by ModeratePoli at 10:55 PM