Did Romney pay his taxes? Make a bet.

I was just reading this column in the New York Times where the author (someone I don't know) explains why it's crass to make an allegation for which you offer no proof. This is such a big topic now, not because some politician just crossed that line, but because a high Democratic politician finally did. (See below.)

It takes awhile, but he finally mentions that this is a common practice of the rabble-rousers of the "far right." No names mentioned, which is odd considering that this is an article about how it's good to provide some evidence. <Cough, Glenn Beck, Hannity, Michele Bachmann, almost all of Fox news, cough.>

A lot of us have been waiting for the Democrats to take the gloves off. I'd prefer them to massively ridicule the lies of the Republican. But many prefer them to get as down and dirty as the GOP does. I'm content with that too. As a parent, and maybe as a civilized adult, I'm tired of seeing bad behavior go unpunished and unrebuked. I'm glad they're doing something.

By the way, I wonder if Mitt would make a $10,000 bet that he's paid 'his taxes every year, and a lot of them.' If he makes such a wager, take it, run to your bank, get $10,000, and tell him to get out his tax returns and show you. The last time he made such a bet, his opponent backed down. But Mitt was lying. If you get a chance, make Mitt "put up" and don't give him the option of "shutting up." 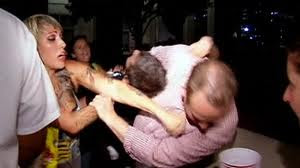 
Evidence that Republicans don't mind the tactic: Michele Bachmann saying, "I wish the American media would take a great look at the views of the people in Congress and find out if they are pro-America or anti-America." Yeah, they were so outraged that she was disinvited from the GOP debates. Um, maybe not.
Posted by ModeratePoli at 5:13 PM

Whether you like it or not, a political pitch in the dirt, or a more aggressive brush-back, is part of the game. If Reid were a better politician, he would have done it more elegantly. He DID offer evidence, but it was unattributed 3rd-party hearsay and Reid said so. (He also said he didn't necessarily believe it.) That's better than the GOP typically offers for their allegations. Mostly they use innuendo and circular statements with false citation; e.g., "The NY Times said: Obama's tax plan will be the largest tax increase in middle-class families in the conutry's history" when, in fact, the NY Times simply quoted a GOP operative saying that.

Romney swung at this pitch in the dirt, which is what Reid was looking for. While Reid will take a hit, Romney's put-up-or-shut-up comment can be thrown back at him again and again now. His demanding to know who Reid got the statement from looks like whining. He can simply prove both Reid and that party wrong.

That was the inelegant part. Romney could distract by pointing at the dirt. The media has to agree that it was a pitch in the dirt. So I'm not sure we are any closer to seeing Romney's tax returns.

Reid's other mistake was using the phrase "no taxes". That left Romney an opening to claim that he paid every year. That is probably technically true -- how can he be proven wrong without the returns -- and amounted in the media as a valid repsonse to the unattributed assertion. Reid should have said something like "This person told Romney used every trick in the book, and invented a few more, to pay virtually no taxes on much of his income." Such a vague assertion would probably gain more traction.

But what Reid should have done is served up a nice, juicy pitch down the middle that if Romney didn't swing at would show conclusively what a lot of people already suspect. That is, Romney isn't releasing his tax returns because there's stuff in there which is so bad he can kiss good-bye any chance at winning the election. It could be an ultra-low tax rate. There may be a year or two when capital losses result in his paying virtually no tax (think 2008 / 2009). There are probably off-shore tax havens and fuzzy write-offs and transfers.

If I were Reid, I my pitch down the middle would have been: "Many of my colleagues, on both sides of the aisle, have told me privately that release of Romney's tax returns would end his presidential hopes. If I were him, and wanted to be president, I wouldn't release them either. Of course, if we're all wrong, Romney can go ahead and release them and make me and my colleagues look like fools, just as President Obama did when he release his birth certificate and made Donald Trump look ridiculous."

There's a seen in the movie In the heat of the Night where Rod Steiger (playing a Southern sheriff) convinces a black Northern homicide detective (played by Sidney Poitier) to stay in the racist town and help him solve a murder. Steiger tells Poitier that he has the chance to prove to all the white people that his arrogance toward them is worthy, and that he doesn't think Poitier can let that opportunity pass by. It works. Poitier stays to serve his own interests.

So if Romney won't release his tax returns to make Reid and his "colleagues" look foolish, he's got something really bad to hide.

This is interesting. Reid could have polished this statements as you suggest, but he didn't. Why? Was it off-the-cuff? is there a real source and that's what the source told him? Is it a triple-fake so it looks real? We could speculate, but we'll probably never know. There are so many unanswered questions in politics.

I don't have a problem with what Harry Reid is doing. He isn't playing any dirtier than the GOP has. It's actually somewhat helpful in a tactical way.

1. He's paid almost no income tax in some years.
2. He took the amnesty offered in 2009 for Swiss bank accounts.
3. His deductions will show that he didn't tithe to the church.
4. His deductions include too many liberal causes.

Maybe there are other very embarrassing write-offs, like even larger amounts for his wife's horse, or year after year of write-offs. I find all these suggestions plausible.

The Republicans who are calling for him to release his tax returns are implicitly betting that it's not that bad. However, his level of resistance makes it seem like it IS that bad. Or maybe Romney is raising the bar so that it's an anti-climax when they're released. (Another triple-fake.)

A triple-fake by Romney? I don't see the gain for him in that. If his tax returns from those years are anti-climatic, then there'll be little coverage. But his 2010 return is bad enough, only 14%, so you can be sure that he rarely paid more than that.

As far as tithing to the Mormon church, he's given so much I'm sure that they'd forgive him. 10% is a huge amount to expect.

I'm pretty sure the answer is: some combination of the items you listed. But one or two items are so bad that they know they can't spin them. This is true whenever a party refuses to release information. No exceptions.

In the end, the winning argument to force Romney to release his tax returns is that the GOP, and Romney himself, would never let a Democrat get away with it. They would harp on it every news cycle, and everyone knows it.

@Anon, Be careful of the words "always" "never" and "no exception."

I support Obama is not releasing his college records. I'm not particularly concerned that Romney managed to hide all his emails from his governorship. These things can just be used as "gotchas" with no consideration of substance or context.

However, I do think Romney is hiding something pretty embarrassing, though I also like my triple-fake idea. Romney's a smart guy, and it worked great for Obama when he unveiled his long-form birth certificate. The more of a frenzy your opponents create, the stupider they look when their accusations are disproved.

I think there's a difference between tax records reflecting the financial transactions of a candidate running on his success as a business person, who also has acknowledged having off-shore holdings, and a candidate's college records. from 25-30 years ago. Besides, Obama's college years must have been pretty good. He got into Columbia and Harvard Law and was editor of the law review there. And, he went on to be a Senator and President. The GOP wants those records so they can attempt to argue he didn't deserve it; that he was an affirmative action black man and, by extension, doesn't deserve the presidency. (As opposed to Romney who had a leg up at birth, I guess.)

So if Obama ultimately released his college records, I think that would be a triple-fake. I doubt there's anything in there that's embarassing. He wouldn't have gotten into Harvard Law if there were.

Romney isn't releasing his tax returns because he has something big to hide, or he wouldn't have made an issue of not releasing them at all. He would just put out a bunch of years and let it lay.

And on the use of "never" for the GOP letting something go, have you not listen to Rush Limbaugh ever?

@Anon, my comment on words was actually focusing on "no exceptions." I can well believe that I'll never see the GOP let an evasion from Dems go in my lifetime.

Update. I no longer like my triple-fake idea. I read a comment on WaPo that has me 95% convinced that there is something very bad in Romney's taxes:

"[Mitt and Ann Romney] eagerly handed over 23 years of tax returns to McCain when it was Romney's only chance at being nominated for VP."

What I see here is someone who did show his taxes confidentially at one point, but only in an attempt to fulfill a great ambition. This man who would do almost anything to be elected, but not release his tax returns? There's probably a very good reason he's hiding them.

Of your four possibilities of what Romney is hiding in his unreleased tax records, I think that only one is sufficient to keep them hidden at this point: Romney paid no Federal income tax, probably in several years, including 2009. That would put him in the most-despised category of citizen, according to the right-wing: those Americans (reputedly 49%--that's the figure they like to cite, anyway) who "pay no tax" and "live off of the rest of us." Some of them would excuse Romney anyway by claiming that at least he created jobs through his investments, but then they'd have to grapple with the evidence that he threw lots of people out of work and created jobs overseas instead. To them, the rich can do no wrong. But a lot more people would be incensed that someone who has so much money didn't have to pay anything in Federal income tax. Even the percentage he admits to paying in 2011 is less than I pay, and my income is a tiny, tiny percentage of his.