Is the GOP for Simpson-Bowles?

One of the biggest surprises in the GOP campaign is the attack on Obama for not supporting the Simpson-Bowles deficit reduction plan (capsule history and summary here). This is so surprising that Ryan's accusation against Obama caused mild-mannered political scientist Jonathan Bernstein to throw F-bombs, in capital letters no less.

So, being who I am, I wondered when this became a talking point for conservatives. They sure weren't embracing Simpson-Bowles in early 2011. So when did it stop being a corpse and start being a stick with which to club Obama?

Here's what I found.
I find it very hypocritical of Ryan, Breitbart, etc. to criticize Obama over his handling of SB since the GOP were even worse. The report came out as the new Tea Party Republicans were chomping at the bit to use their new power in the House. They tried a lot of brinksmanship on major funding bills and over the debt ceiling. Delicate negotiations or reasoned discussion of this bipartisan plan weren't on the agenda for the House GOP.

Funny - is Simpson-Bowles on the agenda now? (Ssh, it's just a prop.) 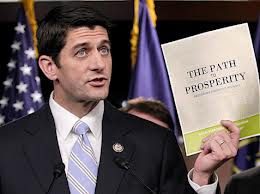 Extra. The House reaffirmed its negative opinion of Simpson-Bowles in a 382-38 vote in March 2012.
Posted by ModeratePoli at 10:29 PM