I've gathered from various news stories over the years that Harry Reid is quite the political innovator. I think he's the one who maneuvered the revised ACA through the Senate using reconciliation, a procedure intended for budget bills.

His latest contribution is being one of the highest official to use the "unnamed source" to cast aspersions on a foe. In this case, the target is Mitt Romney, the weapon is an allegation of massive tax avoidance, and the unnamed source is either a Bain investor or a convenient fiction.

That's all in a day's work for a politician of that stripe. Sarah Palin had her statements about Obama "palling around with terrorists," which is too similar to other political smears for me to worry about subtle differences, such as some people believing "IT'S TRUE!"

What makes this so much fun is that the internet has turned this tactic against Harry Reid in just one day. If you google "Is Harry Reid a pederast," you'll see the buzz. Twitter is atwitter with the rumor, which isn't actually an accusation so much as it's payback or being hoisted on his own petard.

This is what I like to see. A politician does something stupid or questionable. Instead of fake outrage, which I don't think anyone believes, we have a torrent of ridicule, some of which is quite funny. Maybe ridicule fits my personality better. I can enjoy parody 100 times more than a talking head pretending that some outrage could cause the end of western civilization.

Another thing I like about this response: it skewers both the perpetrator AND the method. That's good shooting. 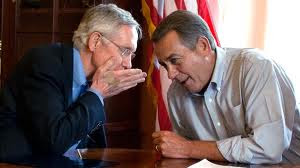 The next un-sourced rumor
Image: abcnews.go.com

Update 8/3/12: According to Romney, the White House is probably behind this. I guess it's now Obama's turn to speculate with or without sources on what Romney's trying to accomplish or avoid. More substance-free campaign fun!!!

Update 9/23/12: Romney dumped his 2011 tax returns on the media world on Friday afternoon, otherwise known as burial time. He has a summary report from an accountancy that claims he's averaged an effective rate of over 20%, but this article points out the very careful wording of the statements and the lack of year-by-year numbers.

I doubt that Romney's returns would show him to be corrupt and in someone's pocket, as was the case for Nixon (when this disclosure got started). I also doubt that he'll release additional years. However, his loopholes and low tax rates would be emblematic of how the wealthy and corporations avoid tax, yet still complain about bitterly about their tax burden while advocating defense growth and greatly reduced social spending. I still want to see spending reined in until it starts to hurt. I'd also like to see a time when we have a stronger, larger middle class and less reliance on plutocrats for revenue.
Posted by ModeratePoli at 2:01 PM