Don't worry about Ebola in Atlanta

Two American missionaries who were treating the Ebola outbreak in Africa have contracted the disease. One has already been transported back to the US, and the plan is to transport the other also. They will be treated in a special isolation unit at Emory University Hospital in Atlanta.

How dangerous is it to bring these patients into the US? That's a good question. However, there are some very bad answers to this good question, like these:


"Martial law is what we risk if an epidemic of something like Ebola were to break out here. Far better to prevent its entry to begin with. Not understanding that is moronic."

"This should not and cannot be allowed; that plane should be shot out of the sky; that hospital, burned to the ground; the unelected bureaucrats and plutocrats behind this decision publicly executed as traitors and tyrants; along with and including our President, who could have stopped this and did not due to this personal hatred of the citizens and dedication to the destruction of the United States." --comments here

So, doom predictions from the peanut gallery aside, how worried should we be? Let's think about it.

Ebola hasn't spread worldwide, unlike various forms of flu. Why? Because it doesn't spread as easily as flu. The disease is spreading on the ground in West Africa, but it hasn't gotten into a major city, even with the traveling that people tend to do. Supposedly, people can't pass it on until they're showing symptoms, so you can't pick it up easily or randomly. It doesn't spread via the air. That's very good, and is probably why it hasn't spread throughout the world.

The usual method of infection is from handling the fluids from a person with symptoms, so the visitors and caregivers are the ones who are being infected. Again, it's not random people down the street.

With this limited mode of infection, it won't be hard for a well-prepared hospital to contain the contagion. They will limit the people who have contact. The air from the isolation unit won't be circulated elsewhere. Caregivers will be gowned appropriately and will disinfect appropriately. The staff will be monitored closely, and any sign of illness will be scrutinized, not ignored. Finally, two patients will not overwhelm the resources of the hospital or the special isolation unit.

Am I worried? No. These people are experts in dealing with communicable diseases. This is their expertise, and they practice it a lot. It's the first time they've had an Ebola patient, but hardly the first time they used these procedures. So if you're worried, calm the heck down. 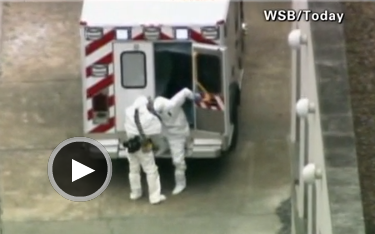 Extra. Idiot-in-Chief Donald Trump weighed in on the idiot side, of course.
Posted by ModeratePoli at 12:29 AM