Oh, the humanity in Ferguson, Missouri

Real life is always more complicated than it seems. Always. Take the first impressions of the shooting in Ferguson, Missouri.

At first, it seemed that a cop either went nuts or was intent on killing this young black man. Now it seems that there was more to the altercation than a cop shooting a young black man for walking down the middle of the street. There's a lot more to the story.

At first, it seemed like the bullet-ridden young man was "a gentle giant" who was about to go to college. Now it seems like he used his size to intimidate a shopkeeper just minutes before he died. Maybe he behaved in a threatening way to the cop too.

At first, the other young black man seemed like a bewildered soul--his friend killed in front of him. Now he seems like an unreliable witness who leaves out important details. It's hard to know how much he's a victim vs. being a perpetrator. Will this man be able to openly talk about what really happened, or will he hide behind his partial truth?

At first, the police in the town were secretive and aggressive in handling the resulting protests and violence. Then the governor called in black state police commander who could be a fair arbiter. Will the local police learn how to address the community concerns about this terrible incident, or will they remain defensive and self-serving?

At first, the community mourned the inexplicable shooting of an upstanding young man. Then it turns out that the man wasn't so upstanding, but they are angry with the police for making them face that truth. Will they be able to deal with the truth?

Finally (for now), it seems that perhaps the cop had a reason to shoot his weapon. But did he have a reason to keep firing it, more times than the witnesses could count, at a man who had raised his hands in surrender?

There were so many poor choices in this incident:
Yet there are some promising signs. The state has found a fair arbiter to talk with the community and ease tensions. He can bridge the gap because he's both a police officer and a black man who grew up in a neighborhood not far away. In the community itself, some local folks have stepped up to stop others from looting during a return to looting. They're still angry, but they know that violence isn't the answer.

We need to be able to admit the imperfections, to accept that people have made mistakes, and not to assume the worst about one another. Maybe then we can learn to be better people and be fairer to each other. I have some hope for a silver lining in this terrible storm. 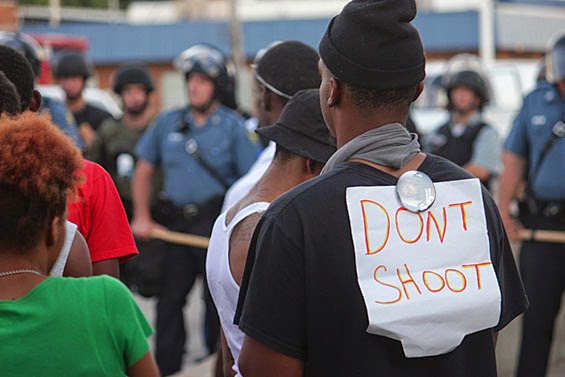 Sources. Video of the robbery. The body left for hours on the street.  The unreliable witness. Two reliable witnesses. Counterproductive police response. The fair arbiter. Stopping the looters.

Posted by ModeratePoli at 5:05 PM