What safety training do police get?

I have a lot of questions, but few answers. Unfortunately, I don't know any cops whom I can ask. And the internet has failed me. I didn't find much information about police training. In the bit of information I did find, there's lot of emphasis on handling of firearms, such as this training list:

... In addition to classroom instruction of deadly force policy and procedure and other topics, most trainers suggest the range work should include:

1.) Clearing stoppages with either hand

3.) Emergency tactical reloading with either hand

4.) Manipulation of safeties and de-cocking levers with either hand

As well as the usual and customary range topics like:

2.) Shooting while moving to cover

I wonder whether the heavy emphasis on gun handling leads to more gun use than required. When dealing with situations, you're usually going to use tools and approaches that you know, not try out new ones on the fly. So the training of officers is key, or so I would guess. (It's possible that officers are acting not based on their training, but based on their own preference to use firearms. I really don't know.)

In my research, I found one cop who wanted fewer guns and more non-lethal alternatives. This seems sensible to me, but I don't know how much other officers support this. What are the dangers in being equipped with rubber bullets if you might face an assailant armed with a gun? In our country, there are plenty of armed people that the police are likely to encounter, and I don't want the police to be handicapped in those encounters.

Perhaps police rarely need their guns, and they don't need to carry them on a regular basis, but only when going into situations that warrant it. This is another issue that I just don't have information on. Police departments in this country should be studying these questions--I certainly hope they are. If the mindset is that they need their guns at all times, it's no wonder that they're used too often. 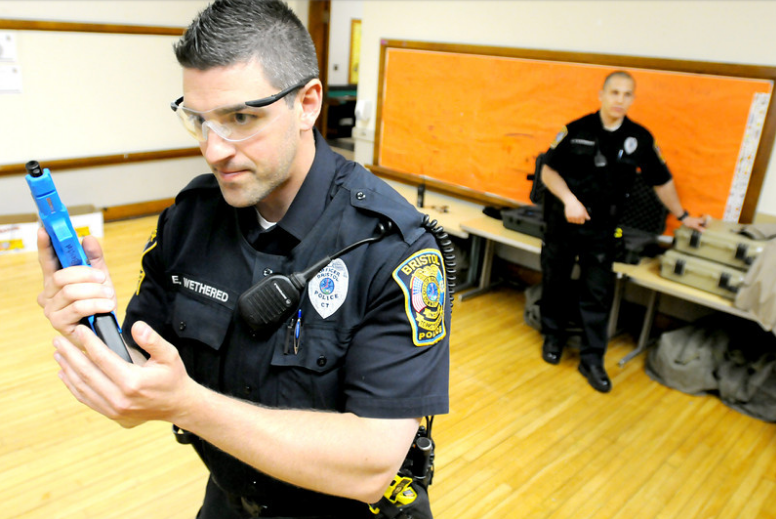 
Extras. Blog from a cop in the hood. Some research from New York City. Luckily, not that many police are killed on duty. That leaves room for them to be more careful. A horrible story of a police mistake.

Update 8/28/14. Here's a training video about handling an assailant who secretly has a knife. Note how quickly the officer could be stabbed, and also the emphasis on  "two rounds [in the] center of mass."

Update 9/10/14. There have been a lot of shootings of officers lately: Rochester, NY; Merrillville, IN; Topeka, KS; West Ashley, SC; St. Louis County, MO; and Vancouver, WA. This is what a cop potentially faces at every traffic stop. The training to shoot may be correct if there is a high level of danger on a regular basis.