The scope of conscience in same-sex marriage

I don't remember ever having to do something that felt very wrong. And I've never had to deny services to someone who was sorely in need.

Denying services is exactly what Kim Davis wants to do, so she doesn't get my support. If she feels that she can't issue marriage licenses, she can quit her job. If she doesn't want to quit her job (and that feeling is even stronger than her stance against same-sex marriage), she can tell herself that she isn't performing the weddings or even supporting them, she is only do the bureaucratic work of asking the state's questions, filling in answers, and determining whether applicants meet the state requirements.

However, Kim Davis doesn't have the power or mandate to decide who can get married and who can't. She wasn't elected to be the judge of those issues, so she very much oversteps her mandate when she refuses to issue marriage licenses. She ought to decide whether she is going to be a county clerk or going to be an conscientious Christian during her work hours. She wants to be both, but that isn't her remit. She should stop being a spoiled brat insisting on both, grow up, and make up her mind. 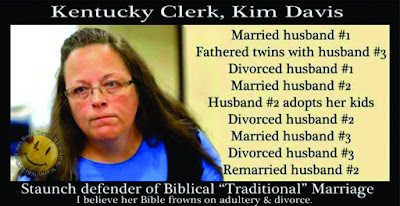 Extras. Town vs. college in Davis's hometown. Interesting political landscape. More quotes, but not more insight in this article.
Posted by ModeratePoli at 4:47 PM

Yes, do your job or quit. Religious or "conscience" is never an excuse for bigotry. She's wrong all around and deserved to go to jail.

But more infuriating than this hateful and stupid woman are her supporters and lawyer, trying to turn that hatefulness and stupidity into a cause worth fighting for. She doesn't agree with the law so she can ignore it? She always did it this way before? Those are her reasons?

I really, really hope she tries to stop it again and gets thrown in the slammer again. It's the only fair way for justice when people who had to spend time in jail unjustly for violating bad laws designed to discriminate. She cannot be allowed to win, lest it encourage others to do the same.

But I take solace knowing that even the God she purports to love is going to smash her when she finally has to face the questions she refuses to answer at the Pearly Gates. Men let you out of prison eventually if you hold out. For Heaven, you have to wait for eternity if you don't have good answers. Someone should remind her of that, because she better be sure she knows what her God wants.

@dangerous, I also hope she ends up in jail again. I hope the judge sends her to jail anytime she interferes with processing a marriage license.

Unfortunately, that only gives her more exposure and more reason to do it again. But sending her to jail is better than letting her break the law, so there's the answer.