Trump plans to blow up the budget. Conservatives don't notice.

Trump continues to pretend to be a serious candidate, at least part of the time. In that vein, he threw together a tax plan, cribbing a lot of it from Jeb Bush, and announced it yesterday. It's got lower tax rates, it's got more breaks for low-income people, it's got lower corporate tax rates.

What's interesting is that he seemed to choose the rates only to beat those proposed by Bush. That seems to be the extent of his math--just underbid Jeb.

Plenty of conservatives commented on the similarity to Jeb's plan, but few bothered to ask whether the plan would lead to huge deficits. Among the see-no-evil brigade are Mark Levin (who is possibly evil incarnate), the Daily Caller, and Breitbart.

Among the ludicrous praise:
One conservative writer, a no-namer on HotAir, mentioned at the end of his piece that the tax plan might not be revenue-neutral, so The Donald might have trouble paying for his grand plans of military superiority and healthcare for all. But even the writer didn't mention that deficit spending would soar.

How much could the deficit soar? Maybe by $10 trillion over the next 10 years. So Obama-sized deficits. But when did Trump ever go small? 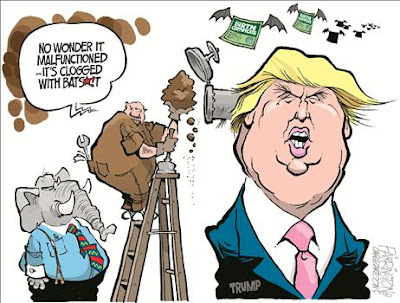 This is all just guesswork on the impacts, except one thing for CERTAIN is that the rich will pay a lot less, and others will be bribed to allow it by paying a little less, while having the services of government cut by 10 times as much.

The wealthy have always hated and continue to hate democratic governments with the power to tax them. Totalitarian regimes are far better for separating themselves from the masses, although that's not so good for business either because they are lousy at productivity when they have nothing to gain, and they make terrible customers because they have no money.

Slavery is good for the wealthy -- using threats of beatings and worse to require maximum production with minimal input -- except you still have that customer problem.

So democracy it has to be for a middle-class customer base, but we have to trick them with every means available to keep them from demanding more from their democratically-elected government who will feel compelled to take back some of the largess we've spent so much time and effort to insure flows to us.

The above may sound like ravings, but it's just basic economic theory put into practice in the modern GOP. Rail against deficits which are only the result of spending, while cutting taxes on the bogus claim that it will increase revenue somehow. Starve the beast and blame the best for its own starvation.

You can't blame them. The plan works pretty well until the economy crashes. Gravity is a pesky menace to pie-in-the-sky economic and tax policies like Trump's, Bush's and all the others in the GOP. It's also a menace to pie-in-the-sky economic and tax and spending policies of the Left, but at least they are more intellectually honest about the force of nature in demanding to soak the rich. The Right pretends Gravity doesn't exist and that cuts in programs that don't help them are painless.

What is shows is that you can't take anything serious from the modern GOP, but they'll keep trying until the country gets wise to their nonsense once and for all.